Think drones are only for outside use? There's a major rethink happening in the sector.
Written by Greg Nichols, Contributing Writer on Aug. 12, 2020 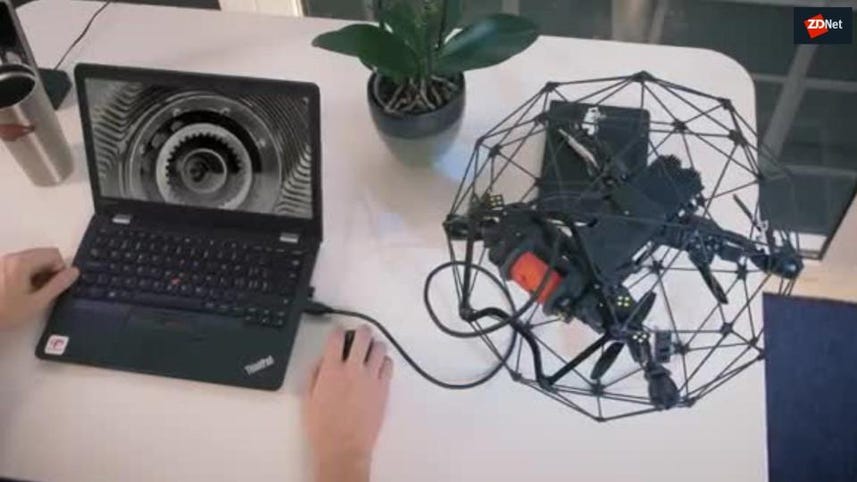 Last year was a quiet turning point in the use of flying robots in an unexpected space: Indoors. Increasingly sophisticated sensor and mapping technologies, machine learning, and engineering and materials science have combined to enable drones to operate inside -- often overhead -- in enterprise applications like inspection and inventory management.

The drones span sectors like oil and gas, which have long been adopters of drones for outdoor inspections of pipelines and infrastructure, but also retail and grocery. A company called Pensa, for example, makes drones to scan store shelves and track inventory. Verity Studios, founded by Kiva co-founder Raffaello D'Andrea, makes drones with failsafe algorithms to keep them stable in the event a propeller fails. That measure of safety has allowed Verity to put on extravagant indoor stage shows using drones as performers. Another company called Flyability makes drones for indoor inspection and exploration, and its Elios 2 drone, a confined space inspection UAV, has been a trailblazer in terms of case studies.

Bureau Veritas France, for example, used the Elios 2 for a ballast tank inspection on one of its cargo ship, resulting in a safer and faster inspection with high-quality HD images available post-mission. The inspection was performed with one drone pilot in three ten-minutes flights. Typically, the same inspection would require three to four inspectors utilizing ropes, oxygen monitoring devices, and extensive safety equipment. Flyability's drone's collision tolerance and onboard lighting allowed the pilot to maneuver the drone safely and efficiently without any external light source.

"[Crash tolerance] is the true enabler to gathering data in the intricate and hostile places where our customers are searching for insights," says Patrick Thévoz, CEO of Flyability.

The company gets away with what is essentially a crash-resistant drone with a combination of onboard smarts and a physical cage. A previous model innovated a passive cage to protect the sensitive propellers from catastrophic collisions. Elios 2 adds to that passive mechanical protection with 7 vision stability sensors for GPS-free stabilization. By enabling the drone to function without GPS, the company removes one of the primary impediments to using most drone platforms, which rely on GPS for a number of navigation-related functions, indoors.

Safety is one of the big promises of confined space inspection using flying robots. Nuclear power plants, for example, can be dangerous worksites with highly radioactive areas that contain critical components. Traditionally, inspectors have very little time to inspect said areas because of the radiation dose, forcing them to run in and out to perform the inspection. For a thorough inspection, the plant needs to go into outage, which is extremely costly to the operator.

Nuclear plants typically put reactors in outage in spring and in fall for maintenance, lower energy use periods due to generally mild weather. In spring 2020, over 50% of all US nuclear plants used ELIOS 2 for their inspection in high-dose areas, according to the company. In one particular instance, an operator was able to use the drone to find a steam leak and its cause without having to expose personnel to what would have been 3 Rem, which is 3x the amount of exposure needed in a year to develop cancer. In another instance, an operator was able to inspect a potentially critical flaw without having to go in outage, saving the site over $500K of downtime. In both instances, workers were able to perform the job without being exposed to radiation and without having to build and climb scaffolding.

Inspection has been a growth area for robots, with concepts ranging from rolling avatars to suction-cup drones designed to climb into tanks. DARPA's recent SubT challenge accessed developers to push the limits of robotic controls and communications in confined spaces. The ability of drones to take the sky in tight spots lends increased flexibility, access, and speed, pushing various industries even further toward robotic adoption to complement human inspection regimens.