With smartphone battery performance a key concern for users, Microsoft is trying to ensure its Lumia 950 and 950X stand out from the pack with a 50 percent charge in 30 minutes.

As smartphones become more powerful, handset makers are keen to find ways for batteries to keep pace. Samsung is championing wireless charging for convenience, while its new flagships, the Galaxy S6 and S6 Edge, ship with its Adaptive Faster Charger, which promises a zero to 50 percent charge in about 30 minutes. Likewise, Google's new Huawei-made Nexus 6P can reach a full charge in 97 minutes.

Microsoft has taken to the Windows Devices Blog to boast that its Windows 10 Lumia 950 and 950 XL flagships offer the same fast-charging capabilities as its Android rivals. That's partly thanks to its choice of processor.

The two Lumia handsets are respectively running on Qualcomm's Snapdragon 808 and 810 system on chips, which both feature the company's Quick Charge 2.0 technology. 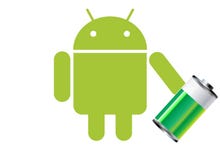 Whether you're running stock Android on a Nexus or a customized version on a Galaxy S5, here you will find simple tips and tweaks that will help you to understand more about what's going on with your device and how to get you more battery life.

As Microsoft notes, both handsets can charge from "critically low" -- as in 10 percent capacity -- to 50 percent in 30 minutes when the device is connected to its USB Type C Fast Charger.

Microsoft also sees Continuum as a plus on the battery-charging front. Continuum allows the two new Lumia devices to serve as a desktop PC, offering a traditional desktop experience with Start Menu, keyboard and mouse support, while apps such as Office scale to the connected display.

Last month Microsoft released its Continuum display dock to facilitate the connection to an external display. While Continuum can be enabled through a wireless Miracast device, the advantage of using Microsoft's dock is that it will charge the phone as well.

Microsoft's new flagships also support wireless charging, which might not be as fast as plugging them directly into a power source, but can be convenient.

However, with the reversible Type C USB port, using a chord is going to be less of a hassle, and Microsoft may have been able to shave off a millimetre or so if it didn't support wireless charging. Indeed, these were two of the reasons Google dropped support for wireless charging.