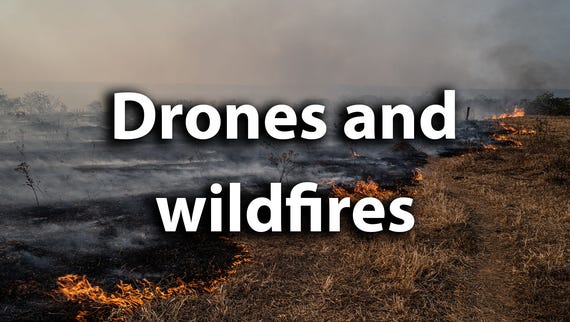 The alarming increase in the occurrence of wildfires isn't going away. In fact, fire frequencies are projected to increase by approximately 27% globally by 2050. Areas such as North America, Northern Eurasia, and Australia are deemed to be most susceptible to wildfires, making finding effective methods to respond to them increasingly more important.

Increasingly, fire departments across the globe have started to deploy first responder drones to ensure firefighter safety as well as enhance operational effectiveness when tackling a wide range of emergency sites including oil wells, high rises, and wildfires.

In response to a recent forest fire that broke out in Athens, Defense Minister Nikolaos Panagiotopoulos said that the armed forces would strengthen their capabilities in fire prevention, deploying drones over other vulnerable sites across the country to obtain accurate data. Drone deployment in a fire emergency ensures the protection of personnel, gathers situational awareness speedily and accurately, and provides a cost-effective helicopter replacement and enables fast mapping for incident response and recovery.

Having successfully helped Verizon secure the first BVLOS to fly drones into wildfires in the US through a landmark waiver, leading drone-in-a-box manufacturer Percepto is keen to raise awareness about the positive impact of quickly responding to natural disasters as a result of global warming through the deployment of drones. I caught up with Percepto CEO Dor Abuhasira to learn how.

GN: How are drones being used to prevent wildfires?

Dor Abuhasira: Drones can be used to prevent the occurrence of wildfires in a similar way they are used to prevent disaster at industrial sites. They can boost inspection frequency to inspect and monitor sensitive forest areas regularly, especially during times of year that wildfires are most likely to occur. As manual data reviews don't catch all failures, drones can use AI powered solutions to collate data from all sources such as cameras, and SCADA systems. Drones can be operated remotely to help prevent a huge failure even in the midst of a pandemic or natural disaster with the ability to monitor facilities remotely.

They respond to emergencies first, eliminating the need for first responders to go in blind to events, and providing engineers and technicians with the information they need to quickly perform repairs.

By performing frequent, high-quality inspections, autonomous drones ensure faults are detected early on, preventing massive failures that can pose harm to employees and the environment.

GN: Why is Percepto's drone-in-a-box Sparrow ideally suited to fly in the most severe climate conditions?

Dor Abuhasira: Percepto's advanced autonomous drone solution is the first to pass Level 5 hurricane testing at a wind speed of up to 155mph, making it the most rugged drone-in-a-box system on the market.

The industrial Percepto base allows their Sparrow drone to safely charge outdoors during the most extreme weather events. The drone itself is also highly ruggedized and can takeoff, fly and land in severe wind, rain, snow and heat.

Percepto's technology can assess their customers' sites immediately after a storm, allowing customers like Florida Power and Light (FPL) to react immediately in the aftermath of a hurricane, assessing and fixing any damage without endangering their staff when the weather is still very challenging where the most residents per year experience outages in the state.

"As soon as the storm passes, we can have this up...inspecting our plant and knowing immediately what sort of damage we have so we're able to get our power back on that much sooner... for a utility to be able to see our infrastructure in areas where we can't get to safely; to quickly fly over it and understand what our conditions are...the safety of our crews is paramount." - Michael Dorr, lead pilot for Florida Power & Light's Drone in a Box system.

Last year, the FAA granted Skyward, a Verizon company, a temporary waiver that allowed company pilots to fly the Percepto Sparrow drone from their homes to inspect critical communications infrastructure near the Big Hollow wildfire in Washington. The waiver permitted operations 24 hours a day, with less than 3 miles of visibility, and no pilot or observer on site. This is the first time a Beyond the Visual Line Of Sight waiver was granted to allow pilots to control the drone from home. It was a landmark for the industry and a testament to the standard of the Percepto Sparrow.

The Percepto drone was designed with the needs of an industrial site' as the core, underlying principle. The drone is made of a composite carbon fiber, fiber-glass material, tailored to accommodate a wide range of temperatures. The extremely durable material is of the sort used in naval industries, able to withstand salt, water, dusk and direct sunlight. Our maintenance philosophy is centered around how industrial sites operate, i.e. maintenance equipment checks occuring every few weeks or months. This caters for the drone to stay unattended for a long time, on the site, ready to launch for emergency. High flight performance enables flying in strong winds with superior sealing and resilience to precipitation, dust, sand, coupled with a heavy, stable Percepto Base. This can open in one piece on an axis in a manner that avoids snow or dust falling into the pad from which the drone is launching (as opposed to the two-piece mechanisms opening sideways which most drone-in-a-box providers feature). The drone's temperature can be monitored and controlled via air-conditioning within the weather station for further protection from the elements.

GN: How will upcoming regulations significantly increase the adoption of drones?

Dor Abuhasira: In June 2021, the FAA announced the new BVLOS Aviation Rulemaking Committee (ARC) - a large-scale collaboration between the drone industry and regulators, over 80 organizations including six drone manufacturers (of which Percepto is one).

In the next 6 months, ARC will make their first round of recommendation to the FAA for a new BVLOS regulation, removing the current need for a drone pilot to monitor each drone that flies. Until now, the FAA has yet to fully enable commercial BVLOS flight.

The new BVLOS regulation will change everything. Fully autonomous drone flights. No pilots. No human involvement. That means we will finally see drones implemented at scale as a network of robots providing various vital services for us. In the next few years, you should expect to see autonomous drones flying around delivering packages, inspecting power lines, solar farms, cell towers and bridges. The many applications enabled are demonstrated by the range of drone companies who work closest with the FAA.

And for industrial drones like Percepto's, it means fully autonomous monitoring of the country's most risky, complex facilities. On a larger scale, it offers companies responsible for our critical infrastructure the promise of employing a fleet of drones to manage and maintain all of their infrastructure from anywhere in the country.

This new regulation will revolutionize industries and change lives when it comes into effect in the next few years. And in the meantime, the industry will continue to move forward within the existing regulatory framework.

GN: How will the drone industry evolve over the next decade with regards to environmental issues?

Dor Abuhasira: Companies traditionally thought of as not environmentally-friendly now have the tools to more carefully adhere to regulations, and prevent catastrophes, e.g. oil spills.

Companies can completely change the way they approach safety and their environmental impact, working towards their ESG goals to enhance their reputation -  e.g. drones are used to monitor a power plant or solar farm.