Full Bio
on December 2, 2016 | Topic: How to Implement AI and Machine Learning

Five years ago, accounting professional Ryan Tietjens found himself in conversation with a handful of strangers who were also going through the motions in their respective corporate jobs. Tietjens and his new-found business partners realised they shared a common desire -- they wanted to build a business out of a new cloud platform that they knew would disrupt the accounting world. 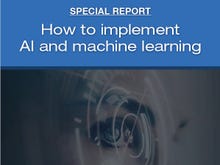 Back when artificial intelligence (AI) was still thought of as a gimmick straight out of Hollywood, accounting was somewhat monotonous and unnecessarily time consuming, Tietjens said.

"Accounting was really taking data from one source and putting it into a software platform, completing your financial accounts, exporting the data out, putting it in to another platform, and then moving on to the next job."

According to Tietjens, accountants would spend the majority of their day keeping the Australian Taxation Office (ATO) happy -- filling out forms to ensure a customer was complying correctly with their business requirements.

It was like Groundhog Day, and Tietjens knew there had to be a better, faster, more enjoyable way of doing things.

Tietjens explained that Xero allows SMBs to not worry about the accounting side of things, as the platform also connects users to an accountant, with mutual transparency.

Before Xero, fresh faces entering the accounting working world after university would have their dreams somewhat crushed, as Tietjens reiterated: "All you really did was fill out forms for the ATO".

"When Xero came along, we were like, 'Hey, this is pretty cool, with connected data, taking data directly out of a client's bank account', and we were able to produce financial reports right through to tax returns," he said.

"Now we can visualise data with dashboards and do all this other cool stuff, but what it meant is we don't have to focus on or spend as much time on compliance as we used to."

So what does the future of the accountant look like as more work processes become automated and delegated to technology?

Adding artificial intelligence to the mix

There are many things a machine can do better and more efficiently than a human, such as trawl through thousands of web pages to find your closest service station -- this is AI as experienced passively by hundreds of thousands of people on a daily basis.

Using algorithms to help make better decisions has been the "next big thing in analytics" for more than 25 years, but it's now become a full-throated mainstream business direction. The influx of available data has also helped AI shift into the mainstream.

After spending 10 years building a cloud accounting product suite, Xero has finished ironing out its platform. It is now focusing on expanding its repertoire of AI-related services, with Drury telling shareholders last month that his company is well positioned to capitalise on machine learning, which he has firmly believed for a long time will redefine accounting in future years.

To Tietjens, the number one feature Xero launched was live data, which uses AI to pull bank feeds automatically into the platform.

"Before Xero came around, you had to export data out of your banking package, bring it in to your accounting software, and reconcile it," he said.

"Now you wake up in the morning and spend 10 minutes reconciling your books and [making sure] your accounts are up to date, right up until close of business yesterday. It's amazing for the client, but so much better for the advisor as well, because if the client rings up and wants advice, you actually log in and see how they've performed right up until yesterday.

"You still have to pinch yourself sometimes as an accountant, because you've got access to such live data."

While this does not seem like something to get excited over, Tietjens said that historically, the client would have to export their accounts -- which could be over a month behind -- have it brought into the office, find a computer with whatever version of MYOB the client was using out of a possible 20, import it, export the data into Excel, and then the accountant could get started on the analysis.

Leaving the software to handle the massive-scale calculations allowed Tietjens and his team to build an accounting firm that focuses on more than just pleasing the tax man.

When trying to understand these statistics, Xero looked at three key aspects: Advisor connection; bank feed integration; and the end user's platform of choice. Xero found that 92 percent of Xero users have an advisor and are connected to an accountant or a book keeper; 99 percent are connected to their financial data in real time through a bank feed; and 40 percent of them are using an app.

So where does Interactive Accounting come into this?

From day one, Tietjens and his team stipulated that every client they signed had to be on the Xero platform in a bid to be as efficient as possible when it comes to compliance.

"Advisory services was a little bit of a joke for small business up until cloud software came along, because you can't be an advisor advising on data that is three or four months old," Tietjens said.

"We've really proved that small business owners and especially startups value advice from their accountant more than just filling out forms for the tax office."

Interactive Accounting has disrupted the accounting space in Australia; it has already taken clients off first- and second-tier accounting firms that have long held the market share.

"The clients we attract now [is a result] of the advisory services and the automation and advice we can offer around that," he said.

"If we were using traditional accounting software, there's no way we would have ever been able to attract clients like that.

"I think it is now starting to threaten the big four and second tier -- technology definitely is making a big difference in this space."

He said that utilising machine learning has turned the accountant-client relationship on its head.

"Accounting used to be quite negative," he said. "Clients would only hear from you when you've got a tax due or superannuation due. It was always something you had to pay for, and it was just that negative relationship, but we're now having conversations about helping clients build their business, really taking on that coaching role."

In designing its cloud accounting software, Xero wanted to free up time for accountants and small business owners, but instead, Tietjens took this as an excuse to take on a whole tonne of other tasks. With more and more of the large-scale calculations performed by the machine, his team headed down the venture capital (VC) path.

"It's not something we went out there marketing; we just had a lot of clients that were attracted to us by that advisory element, and we've kind of assisted them in everything from building a financial forecast to closing their books on a monthly basis, to reporting back to their investors," Tietjens said.

He said Xero helped startups get across the line with scoring funding, with investors able to see up-to-date information.

"Startups are notorious for managing in Excel or storing their receipts in a plastic shopping bag, but Xero is so easy to set up and link to your bank account," he said.

"One large client in the US -- who raised $10 million -- was literally an idea; they'd been operating for probably four or five months on friends' and family money. We could invite the venture capital firm in the US into the Xero file to see how the business was actually performing and it is live data, so they could actually see transactions in the bank account and where it's been coded, so there's no smoke and mirrors. It's literally using live data.

"That got the venture capital firm over the line, and now the company is incorporated in eight or nine different countries."

Job displacement or an unprecedented opportunity?

The Committee for Economic Development of Australia (CEDA) published its major research report Australia's future workforce? last year, which called on Australians to ensure that the nation is technologically ready for the workforce of the future.

According to the think tank, more than 5 million jobs -- almost 40 percent of Australian jobs that exist today -- have a moderate to high likelihood of disappearing in the next 10 to 15 years, citing technological advancements as the reason.

With a glass half full, Tietjens said automation is an exciting thing for the accounting profession, as it allows accountants to be accountants.

"The accounting world just became full of form fillers, and it's pretty deflating as a graduate coming in to the profession with all these bright ideas on how you'll be advising businesses on how to grow, but you end up filling out ATO forms for five or six years before you do anything else," he said, adding that compliance and legislation swallowed the creativity element in accounting.

Tietjens thinks AI is going to shake up the entire profession.

"We tell all our grads that come in, 'if all you can do is fill out a tax return or a GST return, your job's going to be redundant'," he said.

According to Xero, machine learning and AI are going to be transformational for small businesses. As the New Zealand-based firm already lays claim to processing more than $1 trillion worth of transactions in the past 12 months alone.

"By being able to dig through that data, find the trends, and improve the intelligence of our accounting engine, we can make Xero infinitely better for small businesses and their partners. It's like giving every small business a supercomputer to run their business," Duncan Ritchie, Xero chief platform officer, said.

"We have terabytes of financial data sitting inside the Xero accounting engine, and being able to configure them to provide learnings is immensely significant for small businesses and their partners.

"Artificial intelligence and machine learning have the potential to really help us rewire the small business economy."

Join Discussion for: ​How artificial intelligence has morphed...