How Dave Gorman fought Flickr over a deleted photo

Award-winning author and comedian Dave Gorman has been battling Flickr, and its parent company Yahoo, for deleting one of his photos following a spurious complaint under America's DMCA copyright act. Yahoo says it cannot undelete Gorman's very popular image -- it was featured on BoingBoing and Wikipedia -- and put things back the way they were.
Written by Jack Schofield, Contributor on March 16, 2012

Award-winning author and comedian Dave Gorman has been battling Flickr, and its parent company Yahoo, for deleting one of his photos following a spurious complaint under America's DMCA copyright act. Yahoo says it cannot undelete Gorman's very popular image -- it was featured on BoingBoing and Wikipedia -- and put things back the way they were. However, there is some chance that Yahoo will change the way it handles take-down notices in the future.

The key point was not the deletion of the image, which was easily replaced, but the loss of what Gorman calls its "flickrness". He says he doesn't pay for a pro Flickr account for storage but for the community, the comments, favourites and links. This particular image had attracted hundreds of comments, and other websites linked to it. Flickr destroyed the comments and broke the links when it deleted the page instead of, for example, temporarily replacing the disputed image with a black box.

In effect, Flickr destroyed the very things that attracted Gorman to Flickr, and gave it its value.

Gorman explained the problem in a series of blog posts starting on March 3 and an impressive flow chart. In brief, it seems that a long-defunct blog called "Of The Wasteland" had innocently linked the word "graffiti" to Gorman's composite image. About six years later, a pornography company called Wasteland Inc hired Degban, a "multimedia copyright protection company". Degban started sending out DMCA takedown notices, presumably based on web searches, and Flickr deleted Gorman's image in response to one of those.

Later, Degban emailed Gorman to claim that "we have been victim of a phishing/hacking attack, which was aimed at reducing our credibility"*, but none of the companies involved comes out of it with much credit**. It's hard to believe that any of them actually looked at the image, which showed letters painted on East End shop fronts (below). You'd have to be insane to think Gorman's pictures and Wasteland's pornography were even vaguely related. It would make more sense to take down the Oxford English Dictionary.

However, there's no reason to think that Flickr and Yahoo are particularly different from any of the other online service providers who operate under the DMCA. Users of all cloud-based publishing services, including YouTube, should bear this in mind.

Part of the problem is that Gorman is British, and Flickr treats non-Americans differently.

The DMCA, an American law, requires service providers such as Flickr to tell users that their material has been removed and give them the chance to send a written "counter-notice" to dispute the claim. If the copyright owner does not file a lawsuit within 14 days, "the service provider is then required to restore the material to its location on its network", according to the Chilling Effects website.

This means websites should not delete images under the DCMA. If they do, how can they put them back?

Gorman did make a counterclaim. Yahoo said the page had been deleted but he could re-upload the image, and it considered the case closed. But Gorman kept on blogging and tweeting and -- perhaps with a bit of prompting from Yahoo's helpful European PR, Caro Macleod-Smith -- Flickr responded. Senior community manager Zack Sheppard "reached out to Dave to discuss the situation and apologize".

In his public response posted on Flickr, Sheppard explained:

"We delete photos based on non-U.S. complaints, and disable photos based on U.S. complaints. In order to disable the copyrighted material rather than delete them from our servers both the user and complainant must be U.S. users. When both members aren't in the U.S. it isn't just the DMCA that applies. Because Dave is a U.K. user and his photo along with the comments associated with the photo, were deleted. Unfortunately, in this instance the notice submitted was fraudulent but Dave can and has reposted the photo after proving that the notice was false. Putting the image back where it was at the same URL isn't feasible with our current process and systems, especially as more than a one off. Because it would be so resource intensive, the best place to put our time and energy regarding this is an improvement that would benefit the Flickr community as a whole."

It doesn't sound like a huge benefit to "the Flickr community as a whole" if their images can be deleted out of hand, but there it is. However, what provides some hope is Sheppard's closing remark:

"We all agree that the system as it is isn't optimal and we are going to be working on, and are already discussing, how to improve it."

It's not clear why Flickr is deleting images where either the user or the complainant is not in the USA: it would surely be better if it disabled them like US images. (Why have two processes when one would do?)

Even if there is some legal reason why an image has to be deleted, there is surely no legal reason why the page has to be deleted. The hole could be filled with a standard notice that says something like "this photo has been removed for copyright reasons". This would retain the "flickrness" that people value and enable them to re-upload photos after the dispute is over.

The US government could help by amending the DMCA, which evidently doesn't do enough to discourage companies from sending out spurious take-down notices. Perhaps they should be obliged to post a bond -- $1,000 would be good but $100 would do -- that they forfeit if they cannot substantiate their copyright claim.

Gorman has obviously put a lot of time and effort into this battle, and he's a celebrity with almost 200,000 Twitter followers. As we know from his TV and stage shows, there are plenty of other Dave Gormans who would probably not have been able to get the same result. But as Gorman commented on Flickr:

"The reason I've been making noise about this is not to seek special treatment for me in this instance, but to try and persuade Flickr that their current policy needs to be changed. I am far more invested in not-having-this-happen-again (to me or anyone) than I am in fixing what happened on February 17th."

* Gorman comments: "when Adult Video News asked [Degban] for a comment they dated the hack as having taken place on Feb 29. I received the takedown notice on Feb 17. Hackers might be clever, but not that clever."

** Gorman adds: "Wasteland have been great about it. They've ditched Degban and are pretty angry at what they were doing." 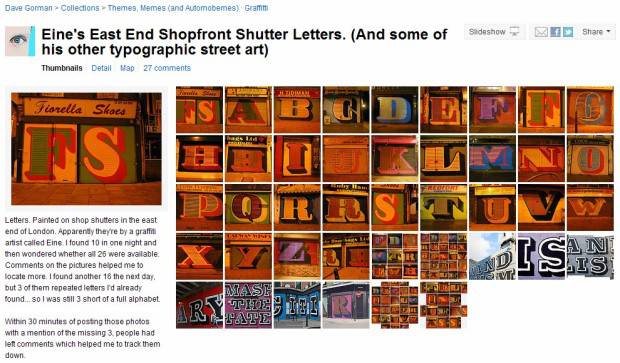 Dave Gorman photographed letters painted on shop shutters in London's East End by a graffiti artist called Eine and posted them as a Flickr set. What could go wrong?

FAA: Here's what caused the outage that grounded US flights