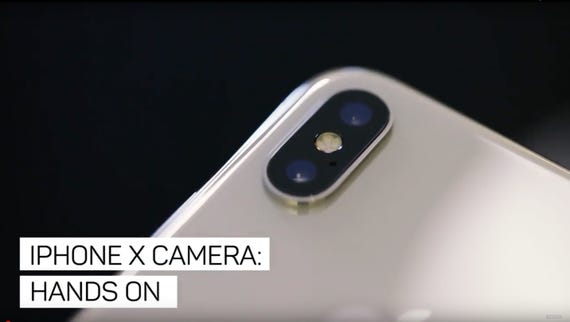 The iPhone X was announced minutes after the iPhone 8, but the products are more like fraternal twins than identical ones. On one hand, the X is an iPhone. It runs virtually all the same software and comes with all of iOS 11's advantages and limitations.

On the other hand, save for the much-maligned notch that Apple worked diligently to pack as much tech as possible into, the device sets a new standard for screen to body ratio by making nearly the entire surface of the device a screen. No device has come closer to the ideal of allowing you to hold software in your hand.

It's easy to downplay the reduction of a device's screen borders. Several vendors of Android devices including Samsung, LG, and Essential (which came the closest but couldn't completely kill the "chin") have virtually eliminated side bezels and minimized the top and bottom parts of the phone. But the iPhone X is more than just a device with a nearly all-encompassing display. It is a statement.

In dispensing with virtually anything beyond the display, the iPhone X realizes a goal that was beyond the technology of the original iPhone. Ten years ago, the idea of a smartphone without a keyboard was far more controversial than Apple's carving out some space within a phone's surface to accommodate components that need to be on the front of the device. Nonetheless, the iPhone X is consistent with the original iPhone's original vision to make as much of the device as accessible to software as possible.

As I discussed in my last column, the switch from Touch ID to Face ID represents classic Apple thinking in terms of placing a bet on one biometric authentication system. It also represents fitting of form to function as opposed to moving a fingerprint sensor to the back. It's also telling that the company considers iPhone X to be a smaller, non-Plus smartphone like the iPhone 8 as opposed to the 8 Plus (its home screen icons do not rotate in landscape mode).

This again reflects the company's traditional resistance to larger-screened devices, although an iPhone X Plus would offer significant size advantages over the current iPhone 8 Plus. Indeed, not everything about Apple keeping to tradition is a benefit as the iPhone X's fun animoji work only with its own Messages app (although the door appears open to other messaging vendors based on Apple's promotion of Snapchat's use of head tracking).

But while it may reflect many traditional Apple philosophies, the iPhone X (and its Touch ID-intact cousins in the iPhone 8 family) reflect an evolution from some traditional Apple viewpoints. In the Files app, the new iPhones include the closest thing that iOS has had to an addressable filesystem. The new iPhones also include expanded support for NFC that arrived with iOS 11. And they include support for wireless charging. Apple had cast aspersions on both NFC and wireless charging in the past. Despite rumors that Apple would develop its own wireless charging solution, it has endorsed the same Qi protocol used by brands such as Samsung, LG and Motorola. (Alas, microSD remains exclusively the province of Android.)

Apple's iPhone X lays the foundation for the next 10 years of the product. But given the primacy of the smartphone in our digital lives, it's surprising in some ways that there isn't more to distinguish it beyond form factor and the attendant (or enabling) technology of Face ID. (It's safe to say that Apple won't be bringing any ZTE Axon M-like dual-screened phones to market imminently.) More broadly, though, the combination -- along with advances in AI embodied by Siri and ARKit -- points to phones that allow more transparent access, provide what we need when we need it, and fade into the background.

The removal of the iPhone's Home button has required some tradeoffs, but the superior usability of Face ID sets a new standard for secure access.

Should you upgrade your iPhone to iOS 11.1?

Apple's iOS 11.1 update is out. But should you upgrade or wait to see if there are any potential pitfalls?

Join Discussion for: How iPhone X melds the best of Apple's past...