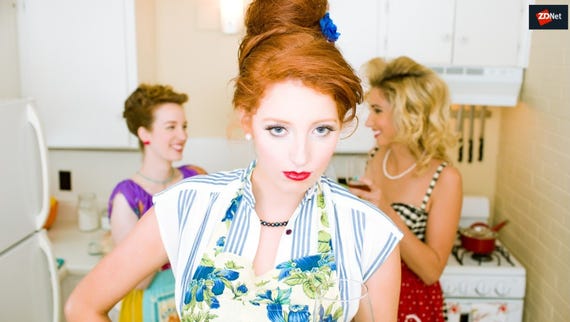 Video: Face ID won't forget you - even if you get a new hairdo

As the chart below shows, you can spend as little as $349 for a base model iPhone SE, or spend as much as $1149 for a fully-equipped bleeding-edge iPhone X.

Earlier this year, my wife donated her 6s Plus to me as an extra 4K camera, and bought an SE. She found the physical size of the Plus phone to be too large. That's one of the more interesting elements of the iPhone X -- it has more screen, in a smaller package.

In this article, I'll be looking at what you might want to consider, if you're deciding between an iPhone 8, an 8 Plus, or an iPhone X. If your decision is mostly driven by budget, then you really want to spend your time with the price chart and decide what you can afford.

In other words, if you want the biggest possible display, but in a smaller phone, the iPhone X might be the phone for you.

There's a lot more going on in that iPhone X screen besides size. As mentioned above, it has considerably more pixels than previous models.

The iPhone X also has a different method of lighting pixels: OLED (organic, light-emitting diodes). This is part of how you can get a more vivid screen. On most iPhones (and most non-OLED phones), the LCD display doesn't light up. Instead, there are side or back lights that provide the light.

In an OLED display, like in the iPhone X, each individual pixel produces its own light. Effectively, the iPhone X has 2,740,500 tiny little flashlights in its screen, each producing light.

OLED has many advantages over LCD, but as this CNET article shows, it's not a slam dunk. Nonetheless, you get OLED with the iPhone X. If a higher-quality, higher-resolution screen with greater color quality is important to you, the iPhone X might be worth those extra Benjamins.

Not your Dad's iPhone

We'll get to the camera in a minute, but let's cover some of the weird stuff first. The iPhone X is going to take some getting used to.

Let me just put this out there. The Home button is gone. Just like the headphone jack, Apple thinks you don't really need a Home button.

This is a big part of how Apple got more screen in a smaller space. By nuking the Home button, they get a ton of space back on the front of the phone.

But now, instead of having a tactile button you can find, even in the dark, you have to swipe up from the bottom of the screen to get to Home. And yes, that means that other swipe-up gestures have changed. If you buy an iPhone X, you'll have to live with that.

You'll also have to live without Touch ID. No longer will you be required to press the Home button to authenticate. Instead, you'll have to smile for the camera. Apple is introducing Face ID on the iPhone X.

Face ID adds a couple of new sensors to the front of the iPhone X, including a mechanism that projects 30,000 individual dots at your face, so the phone can measure who you are. I'm not sold on this technology, personally, but Apple claims that Face ID is actually considerably more accurate and secure than Touch ID.

There are some disadvantages. No matter what Apple says, Face ID will fail from time to time. In fact, it failed during Apple's public demo, although Apple claims it gracefully recovered as it was designed to. The problem there was that too many faces were scanned by one demo phone, and it simply got fed up and took its toys home.

My concern about Face ID is similar to the missing Home button: turning on the phone quickly in pitch black. I often get alerts in the middle of the night that I need to pay attention to. I can easily reach for my phone, feel the Home button, and authenticate, all in darkness. But without a Home button and a Face ID system that's essentially a camera, it's not clear to me just how well the recognition will work in darkness.

Also, faces change. My beard grows pretty fast, so I look different (more cave man) towards the end of my barber avoidance cycle than at the beginning. My wife puts on a different face to match each of her outfits. Makeup can significantly change someone's look. Apple does claim it can handle those changes, but, again, I have my doubts.

If you're deciding between an iPhone 8 or 8 Plus and an iPhone X, only you will know whether Face ID and the lack of a Home button excites you, or will annoy you to no end. For me, it's a turn off. But then again, I still have my iPhone 6s Plus, almost entirely because of how often I use the headphone jack.

Let's delay our camera discussion for a few more minutes to discuss ARKit. ARKit is Apple's augmented reality engine, designed to turn an iPhone into a HoloLens without the big head-mounted hardware.

AR has a lot of potential. For example, imagine you could point your camera at a wall, and it can tell you the dimensions of that wall. Apple and others in the AR space often show games being played through a screen, so that you might have a city on a table, or, in the case of Pokemon Go, little Poke monsters scattered throughout the world.

ARKit actually works on iPhones as old as the 6s. I ran a room measuring program (which failed for reasons other than interpreting reality) on my iPhone 6s Plus. On my phone, it actually did discern walls and floors, but because the phone wasn't itself rock steady just in my hand, the floor plan wobbled. That was a failing of the app developer, not ARKit.

In any case, where ARKit becomes interesting when buying a phone is the fact that it's designed to interpret physical reality, then do something with that interpretation. It can find a park bench, and put a little Pokemon guy on it. Or it could interpret a scene, and allow your camera software to manipulate it.

Think about that for a second. Once you have a camera and something smart enough to interpret a scene, you can combine the two to perform some interesting tricks. That, then, brings us to the cameras.

Each generation of iPhone has sported a substantially improved camera compared to the previous generation. The iPhone 7 camera has better performance and better image quality than the iPhone 6s, while the iPhone 7 Plus added a second lens to the back camera.

The iPhone 8 again improves image quality and, taking a hint from the AR capabilities I discussed earlier, adds a Portrait Lighting feature, allowing you to drop out backgrounds and dynamically create new lighting for your subjects without needing to use actual lighting fixtures.

This is where the ARKit capabilities become really interesting. Because as apps get better at working with a representation of reality, photo software can do a lot more. If you thought green screen effects were cool, wait until your phone actually understands what's in the image with you and makes changes based on that understanding.

The big change is the front-facing camera on the iPhone X. Because it needs to be able to perform facial recognition, its capabilities have improved considerably. Apple added a depth mapping feature it calls True Depth. Basically, this allows the front-facing camera to have a much better understanding of what's in the image, and to make it look better.

Think of it as a selfie camera on steroids. True Depth gives you the ability to create smart selfies, with more flexibility and capability than you had with other iPhones.

The rear cameras on the iPhone X are roughly the same as that of the iPhone 8 Plus. The iPhone X telephoto lens has an ƒ/2.4 aperture instead of an ƒ/2.8 aperture, meaning it lets in a bit more light. But that's about it for the camera differences.

If you're a selfie fan, you might want to consider the iPhone X. If you're just taking pictures on the back camera, you're not going to get much more from the X.

The iPhone X uses the same A11 Bionic chip with 64-bit architecture, Neural engine, and Embedded M11 motion coprocessor as the iPhone 8 and 8 Plus. So your $200-300 is not getting you a faster processor.

It's also getting you a substantially improved front-facing camera that's a huge boon to selfie fans.

And, depending on whether you consider this a benefit or a shortcoming, you're getting Face ID and losing the Home button and Touch ID.

If you're still not sure, here are some recommendations based on the various benefits of the iPhone X.

So, there you have it. Are you going to spend the few extra hundred bucks for the X? Let me know in the comments below.