Entertainment personality Kanye West's outburst over the weekend at the MTV Video Music Awards ceremony has implications for the enterprise business world.Jive Software, whose 'SBS' (Social Business Software) 'frees people to engage in open, natural business conversations and workflows that typically are trapped inside of emails, phone calls or meetings', to quote their line, is announcing 'Market Engagement' today.
Written by Oliver Marks, Contributor on Sept. 14, 2009 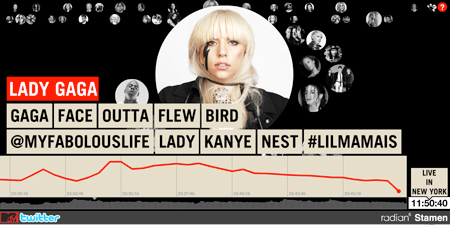 Entertainment personality Kanye West's outburst over the weekend at the MTV Video Music Awards ceremony has implications for the enterprise business world.

Jive Software, whose 'SBS' (Social Business Software) 'frees people to engage in open, natural business conversations and workflows that typically are trapped inside of emails, phone calls or meetings', to quote their line, is announcing 'Market Engagement' today.

Already a well established player in the internal collaboration space, Jive are leveraging partner Radian6 to quickly form social media strategy from key observations of Twitter, Facebook, blogs, and other online social sources to enable faster movement in the moment of pain - or the moment of marketing opportunity - to leverage real time events. 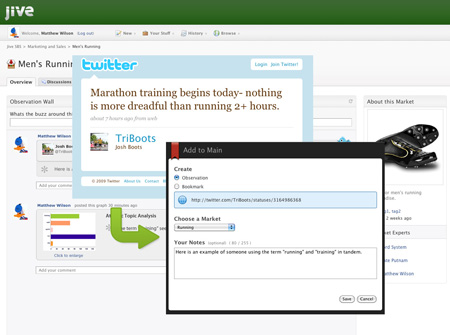 Radian6, who had a big weekend on television this weekend with real time Twitter analysis and visualization during and after the 2009 MTV Video Music Awards, are already partners with WebTrends for web analytics (digital marketing department) and Salesforce.com (sales and customer support departments).

This was the first time a live show like the MTV VMA's used real time monitoring of a social network to reflect how the audience was reacting to events as they unfolded.  A blending of live feedback and analysis with a live TV show - provided by an online platform of Radian6 and Stamen plus interactive host @ijustine live on TV.  Not only did viewers get a glance into the collective reaction (ie. if someone wore an amazing dress on the red carpet and everyone liked it viewers and the online audience could see the collective "gasp of delight") but MTV could see what it's "users" thought of it's "product" (VMA's) and could react and adjust accordingly in real-time.

Radian6 enables just this type of thing with all of its customers, in this case it just happened to be a live, televised awards show.

The holy grail of the modern marketing driven business is not just to have a social media presence but to be agile and reactive in customer relations - to have finely tuned antennae in the marketplace.

Radian6 and other players in the social media monitoring, measurement and engagement space are forging ahead in the consumer space, with events like the MTV awards demonstrating how powerful an interactive force in the mainstream media Twitter and other modern tools are becoming. The audience increasingly expects to be part of real time conversation; facilitating this while providing analytics is itself becoming central to the entertainment experience. Lean forward interaction is sexier than lean back passive TV consumption.

Against these shifts in the way people consume entertainment, enterprises struggle to craft viable customer relationship management, which until recently was all about outsourcing telephone support and polling to get the maximum people coverage for the least outlay.

I spoke with Radian6 CEO Marcel Lebrun who said

"Social media is quickly becoming a key part of the business and entertainment landscape.  Radian6 aims to be the engine that drives the collection, analysis, measurement and engagement aspects of this emerging shift.  Whether this involves integrating with various enterprise platforms (like a Jive Software) or innovating with partners on the development of new applications or visualizations (like the MTV VMA's) Radian6 works with brands to adopt the use of social media as a key communications medium with their customers and communities."

For Jive customers like Nike, being part of the conversation and parsing the meaning of words allows them to anticipate product design, launch and marketing.

One of the historical challenges of the enterprise collaboration industry has been not so much setting up analytics but rather figuring out what is worth measuring. Identifying performance indicators is still underestimated, as is most of the strategy and tactics of what is of value using modern 2.0 tools, but being spoilt for choice of what to measure in real time has to be a good thing.

While a public relations disaster or triumph at a less glamorous Jive customer than Nike, like a financial services company for example, is essentially the same as the MTV awards as an event, albeit less sexy to a consumer audience.

Jive’s Market Engagement Solution provides a “Market Space” - a secure area that allows the right people to come together instantly to take action in the moment of pain or opportunity. A Jive 'Market Space' allows users to bring in observations from individual tweets, blogs, or anything gleaned from the baked in Radian6 monitoring tools, which can then be shared instantly.  This “war room” environment allows for rapid tactical decisions from the well informed decision makers within the organization.

These observations can then be consolidated into market summary reports, which Jive calls “Viewpoints.”  These reports can be shared broadly within the organization to foster collaboration and to develop and implement appropriate responses.  Jive Market Engagement also then provides the ability to analyze and measure the effectiveness of those responses.

There is real substance amongst the fluff and ephemera of all the 'social media' hoopla: effective measurement and analytics are at the heart of identifying that business value.