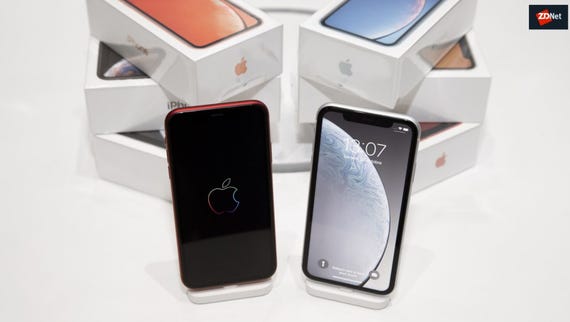 The iPhone is so ubiquitous it's easy to imagine it has always been around, but it's actually only 11.5 years and 16-or-so models old. In that time it has made Apple one of the world's richest and most influential technology companies.

Apple may be about more than the iPhone, but the smartphone generates by far the most revenue. It's also the engine behind revenue generated in other areas -- no iPhone, no Apple Watch, and no apps either.

But it looks as though the days of the iPhone generating big growth could be numbered. The smartphone market in the West is saturated, and Apple has found it hard to compete in the potentially huge market of China. Hence Tim Cook's letter to shareholders yesterday, informing them of revised guidance on its fiscal Q1 2019 revenues because of tough market conditions in China and fewer iPhone upgrades elsewhere.

"While Greater China and other emerging markets accounted for the vast majority of the year-over-year iPhone revenue decline, in some developed markets, iPhone upgrades also were not as strong as we thought they would be," said Apple's CEO in the letter.

Cook blamed some macroeconomic issues -- a strong dollar and economic weakness in some emerging markets -- plus some Apple-specific stuff like the timing of the iPhone Xs and Xs Max, and not having enough Apple Watch 4 or iPad Pros and Air Pods to sell. But Apple had already worried analysts when it announced it would no longer provide data on how many iPhones (and Macs and and iPads) it has sold.

Now it's vital to point out that Apple is a incredible revenue-generating machine. It has managed to push up the price that consumers are willing to pay for the iPhone again and again and is predicting $84bn in revenue for the next quarter and a gross margin of 38 percent. But inevitably some will be wondering where Apple goes next, after the iPhone. As my colleague Adrian Kingsley-Hughes points out, this could be good news for customers in the short term if it puts downward pressure on prices. It may also encourage Apple to bring forward plans for new products.

Apple's vast revenues give it scope to do pretty much what it wants. The problem is it's incredibly hard to find a product that can match the success of the iPhone, or in the longer term replace it.

"We are confident and excited about our pipeline of future products and services. Apple innovates like no other company on earth, and we are not taking our foot off the gas," said Cook in the shareholder letter.

I'm tempted to take that as an oblique reference to the long-awaited Apple car, which could be one of the most interesting products in the Apple pipeline -- assuming it ever arrives. That at least is a project on a big enough scale to have the same potential impact as the iPhone. Having said that, other tech giants are chasing the same target and it's not obvious why autonomous driving would play to Apple's strengths.

Wearables is one area of growth; Cook said that Apple Watch and AirPods grew 50 percent year-over-year, although that's still from a low base compared to the iPhone. Apple's 'other products' -- which includes wearables plus Apple TV, Beats products, HomePod, iPod touch and other Apple-branded and third-party accessories -- stood at $4.2bn in Q4 2018, whereas iPhone revenue was $37bn. Further out you have the possibility of augmented reality headsets and glasses, which Apple -- and Tim Cook in particular -- has long been bullish on. However, there are still big technology issues to be solved before smart glasses are anywhere near ready for mass consumer adoption.

A one-quarter blip is unlikely to worry Apple very much and is easy enough to bounce back from. However, the longer-term question of the post-iPhone future remains. It's hard for some to remember life before the iPhone, and it's equally difficult to visualise life after it, too.

According to ABI Research, the iPhone manufacturer's market share in smartwatches dropped to 43.45 percent in 2018 as competitors up the ante for their smartwatch offerings.

In a New Year, Apple reveals that iPhone sales are softening. With a new ad, it also reveals it doesn't know how to market the iPhone XR.

Revenues will come in lower than a year prior, Apple warned, due to a rough economic climate in China and fewer iPhone upgrades than expected.

Join Discussion for: After iPhone: How long can Apple wait for...