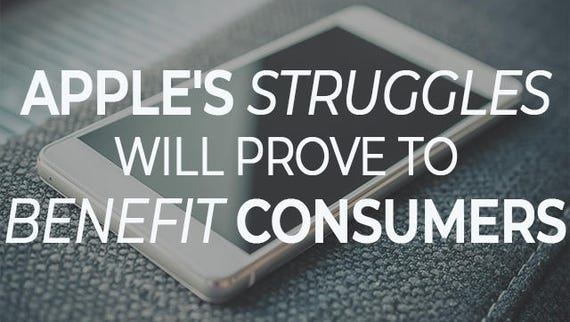 Apple has cut its first-quarter revenue targets to $84 billion, which is some $7 billion below Wall Street estimates. This is the company's first profit warning since 2002, and the first since the company entered into the smartphone era. Apple CEO Tim Cook points the finger at a trifecta of issues: weak demand in China, supply chain constraints, and lackluster iPhone upgrade demand.

But what's bad for investors is likely to be good for buyers.

For a long time now I've been making the point that Apple products are too expensive. The problem is, buyers have been happy to pay the high prices, even choosing to go for more expensive versions. The trend was such that I expected – and still expect – Apple to release a $2,000 iPhone in the next year or so.

The problem is that Apple finds it too easy to sell its products. Nothing underlined this more than when you looked at Apple's 2016 line up of products to find that pretty much everything was old, outdated, and in desperate need of a refresh.

Few companies could get away with that. Not only could Apple get away with it, but fans (buyers and in the media alike) defended this.

They were cheerleading for a company to stagnate and rot.

What would Steve Jobs think of the 2018 Apple? SEE FULL GALLERY

At the start of 2019, Apple is finding itself in a new place. But there's one positive side-effect from this change at Apple – Apple will now have to try a lot harder to sell products.

What will this mean?

First off, I see this having a downward effect on pricing. Not huge, but if you've been paying attention you know that Apple has started to tweak pricing already (of products that the company claimed were selling well, which is telling). I'm not expecting Apple to come out and slash several hundred dollars off the price of iPhones this week, but I am expecting that Apple will subtly readjust pricing so that mainstream iPhone pricing more represents what the mainstream buyer wants to pay.

Another change I foresee is Apple focusing more on the mainstream buyer, and less on the outliers that want to spend over a thousand dollars every year on a new smartphone.

Also: Hey Apple: Forget AirPower. Get your accessories act together

This, I feel, will have to change, and it never seemed viable in the long-term for a company that emphasized high volume of sales.

Finally, I see Apple needing to expand beyond the iPhone. It's been a good run, but the writing's been on the wall as far as smartphone sales growth is concerned for some time now. It's hard to see where Apple will go – there's a lot of talk about the company pivoting towards services, but growth in that area has hinged on hardware ecosystem growth – but as smartphone growth levels off, it will have to put more R&D into things that are not related to the smartphone. Current indicators might suggest this laying in the direction of health and medical issues, given what we've seen come out of Cupertino lately.

So, all-in-all, good things ahead for buyers. Good things in the form of better choice and better prices.

Join Discussion for: iPhone deals ahead? Bad news for Apple is...