How long has Bob Muglia's departure been brewing?

Sometimes the other shoe of an executive's departure drops pretty quickly. We wondered why the CEO of AMD was on his way out right after what seemed like a pretty successful CES for the combined CPU and GPU that AMD dubs an 'advanced' processor unit (it's last year's discrete GPU at a bargain price and with good battery life) in favour of someone who the company thinks can deliver "significant growth, establish market leadership and generate superior financial returns".
Written by Simon Bisson, Freelance journalist and  Mary Branscombe, Freelance blogger on Jan. 11, 2011

Sometimes the other shoe of an executive's departure drops pretty quickly. We wondered why the CEO of AMD was on his way out right after what seemed like a pretty successful CES for the combined CPU and GPU that AMD dubs an 'advanced' processor unit (it's last year's discrete GPU at a bargain price and with good battery life) in favour of someone who the company thinks can deliver "significant growth, establish market leadership and generate superior financial returns". And then Intel and NVIDIA announced a six-year agreement that might be more about settling legal disputes over the graphics Intel already has than putting NVIDIA GPUs directly into Sandy Bridge (thankfully the Optimus combination of NVIDIA and Sandy Bridge is a nice solution to the continued weakness of discrete Intel graphics, which frustrates GPU-accelerated software developers like Adobe) but certainly gives AMD more of a mountain to climb to get that market leadership.

But what's the falling footwear in the surprising and disappointing news that Bob Muglia is leaving Microsoft? Reading between the lines, it looks like something fundamental. One the one hand, Steve Ballmer says "I have decided that now is the time to put new leadership in place for STB. This is simply recognition that all businesses go through cycles and need new and different talent to manage through those cycles". And Muglia's email to his team not only makes him sound like the kind of manager everyone wants to have (which more than one Microsoft employee has told me is true). His definition of leadership includes this definition: "leading starts by setting a strategy - not one that I’ve dreamed up myself but something that my team has worked together to create".

There have been a number of rumours that the direction of the Windows client team is rather more top-down (a benevolent dictator who makes the train run on time isn't going to be popular with everyone, after all) and I've seen several suggestions that the rise of Windows client leader Steven Sinofsky might be making a number of Microsoft executives consider whether they have a shot at the CEO post whenever Ballmer no longer occupies it. or whether the heir is already apparent.

But the more interesting alternative that occurs to us is that the Server and Tools business is critical to Microsoft. 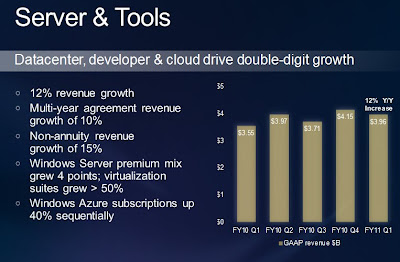 Microsoft sold 240 million Windows 7 licences in 12 months (although with 350 million new PCs sold in the same time, that could mean another 100 million copies of Windows XP too, or it could reflect that fact that Windows is the number one selling operating system pirate copies of Windows are the second most popular OS) and like the Office division it pulled in about $18.5 billion in revenue. Server and Tools is a little smaller, at $15 billion, but it's growing a few percentage points faster than Windows client (12% rather than 10% in the last quarter). Upgrades to Office 2010 and the server products that go with that are pushing server upgrades and Azure gives Microsoft a creditable platform. And with the rise of tablets that don’t run Windows and the number of businesses that will upgrade to Windows 7 this year and stick with it for another decade the way they did with Windows XP, servers and cloud services may have a lot more opportunity for growth in the medium term.

And that means that whoever runs the Server and Tools business has a significant position at Microsoft. Perhaps Ballmer is looking for someone to run the division who could be another credible successor for him?

These kinds of decisions aren't made over the Christmas break (unless that's when you find out that a major competitor is getting ready to make a major announcement that puts you back of the eight ball). They're announced when they won't distract from the good news at CES (where spectators outside the Kinect booths brought traffic to a standstill) but they're decided some time before. And while we don’t think Muglia's much-maligned comment at PDC that HTML 5 was Microsoft's cross-platform strategy rather than Silverlight is behind his departure, knowing that he would be moving on might explain his unusual frankness on a number of topics at the time.

When we asked about getting federated identity for cloud users to be a reality rather than a demo, he suggested waiting just a little while to see it be mainstream for business users. But when I asked him to have Microsoft step up and provide a managed identity for consumers that would put them in control of one account they could choose to use without having to hand over the kind of personal information Facebook extracts, his reply was along the lines of 'not in our lifetime'. That had been one of the aims of the Hailstorm project and Hailstorm, he told me, was his biggest failure - and personally killed by Bill Gates for strategic and political reasons. (Ironically, Facebook has implemented a great deal of what Hailstorm would have offered and garnered only a small portion of the criticism Microsoft faced for similar ideas.)

Claims-based identity - where instead of one monolithic profile, you have individual 'claims' about your name, age, possession of a driving licence, membership of a specific group and so on that you can provide to a site when you choose - has made its way into Active Directory, ADFS and Azure, so the work that the identity team has done for business should be safe whoever takes over. The Windows Live and IE teams are showing respect for user privacy in a way that bodes well. But while identity-enabling, privacy-respecting tools for users need to come through consumer teams, they need a server and cloud infrastructure behind them. The problems with the upcoming version of Windows Home Server have been a rare misstep for the Server and Tools team who have mostly been getting on with quietly producing powerful products and doubling both income and revenue in the five years that Muglia has been running the division. Microsoft needs a successor who can keep up the good work as well as taking the cloud business to the next level and whether they're coming to be anointed as CEO in waiting or chosen to fit in with already-decided succession plans, I personally hope that person has a soft spot for fixing the online identity crisis.