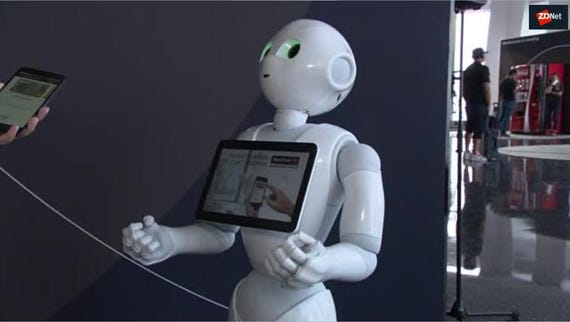 Laying in a hospital bed waiting for a physician, some patients in Höpital Pitié Salpétriére in Paris, France were not greeted by a doctor, but were instead met by Pepper -- the caring, humanoid robot.

Pepper lent a (robotic) hand "during the COVID-19 pandemic, to allow patients on the intensive care ward to communicate with their family, who were not allowed to visit. The robot was able to stand next to the bed of the patient and used the tablet on its chest to deliver a video conference," said Jonathan Davenport, senior research principal analyst at Gartner.

"Though people were often on respirators, and so were unable to speak, hospital staff noticed stress levels of both the patient and family were reduced as a result of the interactions," Davenport said. "Pepper also reduced hospital staff risk levels by decreasing the need for physical contact with patients."

Robots in healthcare are not a new idea. However, with the coronavirus pandemic placing pressure on hospitals and healthcare workers to deliver services, the drive to automate has been expedited, said Karen Panetta, an IEEE fellow and dean of graduate engineering at Tufts University.

"The COVID-19 pandemic has accelerated adoption of the hospital-based robotic technology," said Davenport, echoing Panetta's analysis. "However, it's important to understand that these deployments are currently on a trial/proof of concept basis."

Once the reactionary phase of the pandemic ends, hospitals will reopen for routine treatments, and robots will be further explored at their full capacity, Davenport added.

Telepresence robots like Pepper are a common application, but there are more. The healthcare industry is actually exploring five key areas where automation could improve service.

5 robot use cases in healthcare

While Pepper is a high-profile example of this application, telepresence robots can function in a variety of ways and forms.

"Most people call them 'robots on a stick,'" Panetta said. "They typically look more self-contained, like screens, computers -- more like iPad-looking types of screen."

Telepresence robots often monitor the elderly, whether it's for fall detection or for allowing the patients to communicate on-screen with a doctor, said Quanyan Zhu, associate professor, in the Department of Electrical and Computer Engineering at New York University.

This application has been bolstered by social distancing measures put in place with the coronavirus, Panetta added.

"One of the most heartbreaking things about COVID right now is that people are dying alone, and families can't physically be with them," Panetta said. "Telepresence robots are something that would be with the patient that the family could control. They could maneuver the device around, talk to the patient, and monitor the patient on their own, without the intervention of a medical personnel."

Another coronavirus-induced application is robots for disinfection.

"The name of the game right now is contactless everything, especially disinfecting," Panetta said.

One example is the Xenex robots being used in the Children's Hospital Los Angeles, Davenport said. The hospital has hundreds of rooms with more than 350 beds, all of which require daily cleaning, and robots step in to minimize infections.

"The portable disinfection system takes about 15 minutes per room -- for a total of about an hour when combined with traditional cleaning techniques. The robots complement the cleaning team by performing 'zapping' activities on top of the traditional scrubbing, spraying, mopping, and wiping," Davenport added.

Robots can also help with the general assistance of healthcare services, automating mundane processes typically done by staff. This opens caregivers up for more complicated tasks.

"For example, there was one system that was a robot feeder," said Ayanna Howard, roboticist and chair for the School of Interactive Computing at Georgia Tech. "[The patient] would sit at a desk, and the robot would actually lift up the spoon and it would dip the food and bring it to your mouth."

In the same vein, robots can pick up and deliver medications or supplies.

"Stanford Hospital has started to use robots supplied by Swisslog," Davenport said. "These robots work in the pharmacy and have the capability to pick pills and boxes and put them in bags with barcodes.

Surgery is an evolving application of robots. With security and safety concerns, these types of robots are not widely used yet, according to Zhu, but they are being developed.

"Surgical robots are becoming more prevalent because they have far more accuracy and precision than a human hand," Panetta said. "They also have sensors that are way better than the human eye. You're using these sensors that can see right down to the microscopic level, where normally you have a doctor looking through some assisted device to do that."

Panetta said that these robots aren't left to their own devices, so to speak, but are supervised and assisted by human medical professionals.

"The ability of a machine to go over so many data points and identify patterns will always be quicker than any human being; probably also more accurate in identifying some patterns that sometimes we, with the human eye, have a hard time identifying," Bader said.

"We're seeing a lot of it in the cancer care right now, looking at monographs, looking at CAT scans...looking even at visual pictures of moles for melanoma...The ability to look over it and fairly quickly identify if there's anything concerning or not concerning," Bader noted.

Robots can also help identify paths for treatment, because of its ability to mass volumes of data at a quick pace, she added.

"A machine can read through all this big database of all the thousands of treatment options, and can then take all those medical records of a patient, and in a matter of minutes, match them," Bader said. "This saves all the work or the question marks, and removes the uncertainty."

The main benefit of robots, across the board, is efficiency, Davenport said. Whether it's diagnosing a disease quicker, connecting with a doctor faster, or delivering a medication quicker, robots -- literally -- take the leg-work out.

For more, check out Open source: Boston Dynamics just opened up this robot tech to help tackle COVID-19 on TechRepublic.

Join Discussion for: How robots are revolutionizing healthcare