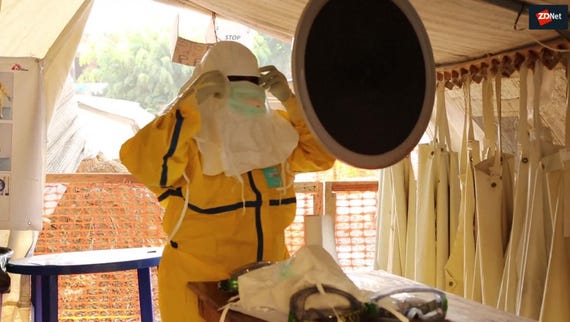 Delivering time- and life-saving telehealth solutions during the West African Ebola crisis of 2014-16 and in the aftermath of the Charlottesville protests of 2017 required leveraging Cisco's Jabber and WebEx, the University of Virginia (UVA) has said.

Brian Gunnell, transformative technology strategist at University of Virginia Health System, told ZDNet that UVA initially became involved in the Ebola crisis in Africa because of its existing outreach programs with physicians travelling to developing nations.

UVA's health staffers had set out to solve the problem that upon entering isolation, Ebola patients were unable to see a human face again during their treatment, with all visitors having to wear personal protective equipment (PPE) but patients still needing to speak to family, physicians, social services, and others.

"We do a lot of international outreach, just the university's mission as far as global is we have so many physicians that travel in different places ... it was through one of those connections we had a physician that was back and we were sitting in our conference room just talking, and she was talking about the isolation and we had never thought about it," he told ZDNet.

UVA then began thinking about how it would respond to Ebola locally -- with patients referred to the university's hospital -- and it began standing up Cisco infrastructure both in the US and throughout Africa, Gunnell told ZDNet.

"We didn't know how they were going to use the systems, but we knew we had value, so it was everything from nutritional services ... to having social services being able to have a conversation with that patient, having specialists to be able to go in to see what's happening in that environment to look at a patient, because when you're in an Ebola environment like that, you no longer have the standard of care," Gunnell explained.

"By using these services, we're able to get closer to the standard of care and then provide a safer environment for our employees internally."

For example, UVA was able to have employees in the hot zone hold up vials of medical tests to the camera so physicians back in the US could see and make judgment calls on them -- which saved time because those in Africa wouldn't have to spend 45 minutes taking off their PPE gear before being able to speak with doctors.

"So this really helped us to be able to communicate with these folks, they didn't have to leave that environment to come out," he explained.

The Ebola response changed UVA's entire telehealth approach, he said, because prior to that, most of its efforts had been based on reaching out into the community to provide services to people who were coming into the hospital.

"This was really our first effort that we were providing a very large communications structure with inside of our organisation to help support the service lines for us, and the use cases just really started to kind of fall out all over the place," Gunnell said.

"Utilising this network of basically the unified communications network, we use both the mobile technology with Jabber and WebEx in this environment to support these efforts."

Gunnell said UVA was then able to use these telehealth applications and technologies during the Charlottesville protests in August last year, during which a car was driven through a crowd, killing one person and injuring 19 others.

"When something like that happens in your community, a hospital like us, that really stretches our resources," he said.

"By having all of these systems in place to support the communication using Jabber across the tablets, we were able to shift our intake of those patients from the emergency room to the lobby, so it makes us very nimble to be able to change our operation and then have eyes on what was happening in the lobby, so tablets in nurses' hands as they're taking in patients."

UVA also had cameras in the hazmat centres where people were presenting after having been sprayed with mace and sustaining other injuries in the crowds, and was also able to liaise with security on potentially dangerous patients.

"It really helped us to see what was happening at all of those different intake points within the community and be very well prepared," he said.

"When you have an event like this in your environment, the patients that are coming in are actually still a security threat; they may still have weapons on them from what's been going on, and they're still very emotionally charged, and so being able to work with security in those environments and communicate is invaluable.

"By basically being able to shift around services and to communicate, we can respond better to our patients, keep our existing patients safe and away from the activity, and then keep our employees informed and prepared to know what's going on in the health system -- and WebEx and Jabber have been an invaluable tool for us to provide those communications both via live broadcast, over instant message, or WebEx rooms that we'd stand up, and be able to have a conversation around what was happening and plan for an event."

Even without crises and special events, Gunnell said UVA makes use of its iTreat pre-hospital health assessment, providing mobile tech in the back of ambulances so a consult can be performed immediately for patients presenting with stroke symptoms, for instance.

When they arrive at the hospital, these patients can then go straight into CT, saving time and potentially lives.

Working throughout the region and globally, Gunnell said the university's telehealth program has saved patients from travelling 17 million miles in total, and the equivalent of 7,000 tonnes of C02.

Join Discussion for: How the University of Virginia delivered...