Satya Nadella's latest memo on how Microsoft needs a culture that can keep changing and adapting comes at an interesting time; the third anniversary of buying Yammer (and PPi, the team behind the new Surface Hub).

Coming out with devices that define product categories is still important for Microsoft. Band and HoloLens aren't going to be the last hardware from Microsoft, Dave Coplin (who glories in the title of Microsoft's chief envisioning officer) told me this week: "There's more of that coming."

But while PPi has come up with a product Microsoft hopes will change meetings, Yammer has had a huge impact on the Microsoft culture over the last three years - because what Yammer has always been about is changing the way companies work.

As Yammer CTO Adam Pisoni put it in 2013: "We know our value isn't our product - it isn't messaging or search. Our value is that we're helping companies be more adaptable, more transparent, more aligned."

In 2012, there were few companies that needed help with that more than Microsoft. It had already begun the shift to what we're now used to calling 'cloud-first' development.

But at the time it was a sometimes painful process internally and Microsoft was still prone to internal division.

When Steve Ballmer talked about the advantages of Yammer for businesses at the launch of Office 2013, he might as well have been talking about how it could help Microsoft. "We need to let individuals in an organization band together and then work together, where appropriate, under the administrative control of the enterprise. That was the key kind of concept for us in terms of the acquisition of Yammer and embracing Yammer as a social infrastructure for people to work much more collaboratively."

When Microsoft bought Yammer, the assumption was that this quintessentially Silicon Valley company (it shares an office building with Twitter) would be crushed by the Redmond way of doing things.

But as former CEO David Sacks tweeted in 2014: "Yammer's culture post-Microsoft: 100 percent of the irreverence with 800 percent better production values." And Yammer CTO Adam Pisoni saw Microsoft as both a great place to learn about the enterprise customers the service is designed for - and somewhere to experiment.

In 2013, he said: "Being inside Microsoft has been very helpful for us to understand how big a company absorbs these ideas. What are the problems they see? What are the memes and norms? I actually feel like we'll be more effective at our jobs, being in a big company because it helps us understand the problems of big companies."

And Microsoft didn't only want Yammer to help its customers; it wanted to get the benefits of an enterprise social network for itself, and to learn how to build cloud services at cloud speed.

Pisoni was soon flying up to Redmond on a regular basis to work with the Office team. Part of that was to help the Office group to set up an internal team "focused on product-driven analytics", but he was also changing attitudes. The team that Microsoft had bought to improve search in SharePoint had had the idea for the Office Graph for a long time but they'd found it hard to explain. Post-Yammer, when they just went ahead and built it so they could show people how useful it would be, that wasn't seen as an unapproved skunkworks project, just a way of experimenting.

Still, getting Microsoft employees to use Yammer didn't happen overnight. Even before Microsoft bought the company, there was a Yammer network inside Microsoft, set up by some photography enthusiasts who wanted a place to talk. There were also official events designed to get people onto Yammer; in 2013 one team in Redmond had what Pisoni called "a 'Yammer week' where they did all their work in the open. They had a theory that they could help each other align on their projects and be more efficient, but it didn't just help them. It helped a group that works with them. And other groups who saw the experiment saw places where they could align with that team". 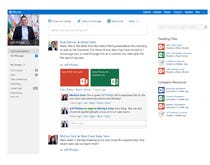 Microsoft Office 365 and Yammer integration: An update on what's coming when Microsoft is providing more dates and details about how it is integrating its Yammer enterprise social-networking technology with Office 365.

Early Yammer use at Microsoft wasn't all positive, but even the arguments could be productive, Pisoni noted when we met last year. "Someone at Microsoft made a comment about a product in a mean-spirited way and the person who made the product popped up and said, 'Hey I make that product,' and they had a conversation. I think there were parts of the company so used to being in a silo that they had to realise they could communicate and get used to having constructive conversations and people got more constructive with each other."

Fast forward to 2014 and if you worked at Microsoft and you wanted a new laptop, you had to use Yammer to request it. But it wasn't just a different way of filling in a form, Coplin told us. "It's not just another inbox, it's a culture. You're now measured on your contribution across the company."

About the same time Pisoni was pointing out that, "In Microsoft, a lot of work on products is in public groups on Yammer. You don't have to go ask someone about it, you can go look at it."

That's a trend that's continued all the way to what Nadella calls internal open source; the Visual Studio Online team makes all its code available internally and other teams now jump in and build things. "The team in Office that's doing a lot of Android and iOS development have contributed a bunch of stuff to the build system to do code signing and other things they need in Android and iOS that are going to be part of our commercial product," Visual Studio Online head Brian Harry told us earlier this year.

Three years ago, that would have been unusual at Microsoft. Today, with dozens of projects not just open sourced but being developed in the open, it's clear that things are different at Microsoft - and three years of Yammer is part of that change.

Join Discussion for: How three years of Yammer has changed Microsoft...