Hewlett-Packard on Wednesday outlined the mother of all preannouncements with its long-awaited move into 3D printing and plans to build an ecosystem with a general availability in 2016. 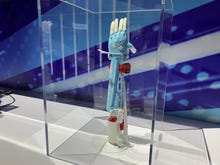 As previously noted, the 3D printing market, which includes well-capitalized companies such as Stratasys and 3D Systems, is going mainstream in the enterprise. The consumer market will take time to develop. The wild card for the industry---not to mention the valuations of 3D printing stocks---has been HP's entry.

HP rolled out its Multi Jet Fusion 3D print technology on Wednesday as part of its blended reality event. The event also highlighted Sprout, an immersive computing platform , but 3D printing is likely to have a much broader impact on business.

The big question here is whether HP can make a splash into 3D printing possibly two years from now. Ramon Pastor, vice president and general manager of HP's large format printing unit, acknowledged that the company is announcing its entry early. But HP's technology is unique to the market and the bet is that the company can create an open ecosystem ahead of general availability. Details such as design software integration and sales strategy need to be worked out.

With Sprout, HP bets on remaking the PC as a 3D maker tool

On the ecosystem front, HP said it is working with six customers on 3D printing innovation with partners coming on early in 2015.

"We'll launch in the second half of 2016," said Pastor in an interview. "We know the risk of preannouncing this, but there are the benefits of putting this in the hands of third parties to innovate on the platform."

In early 2015, HP will start working with partners on developing materials and developing new workflows, said Pastor. "We have prototypes of the printer working today that are better than what's in the market," he added.

Will customers wait? HP hopes so. For starters, the buying cycle for 3D printers can take a year since they are a major capital expense. In addition, HP boasts that it can complete jobs as much as 10 times faster than what is on the market today at a much lower price.

HP's 3D printing unit, which will be housed in HP Inc., the PC and printing division of the company that will be split off from HP Enterprise, is also making a big bet on so-called service bureaus. Service bureaus are centralized 3D printing locations that would print parts for consumers and customers. HP does ultimately plan to launch consumer 3D printers too.

According to Gartner projections, HP's timing may not be that far off---even with a two-year early announcement. 3D printing has gone mainstream in the enterprise, but the meat of the growth comes in 2017. HP's bet is that it can enter the market a bit late with innovative technology and grab a big chunk of the market.

Pastor wouldn't discuss pricing, but did note that HP could come in much lower than the $1 million a system some 3D printers cost today. HP's 3D printer will initially focus on plastics, but Pastor said the company does plan on metals, ceramics and other materials going forward.