HP's new Z1 is a workstation built into a 27in. screen, in a way that IT departments and users will love.
Written by First Take , Previews blog log-in on March 21, 2012

HP's new Z1 is a workstation built into a 27in. screen, in a way that IT departments and users will love.

For a home PC, an all-in-one PC is an ideal solution; a screen that's big enough for movies — often a touchscreen so you don't have to pull out a keyboard to look at photos or browse the web — and only one cable to deal with. That would be just as useful at work, especially with desk space coming under pressure as companies try to save on rent by squeezing more people into smaller spaces (hot-desking and being more flexible about starting new projects quickly are also less convenient with the multiple boxes and cables of traditional desktop PCs).

But consumer all-in-ones don't have powerful processors and graphics cards, because they're designed for casual gaming and multimedia, and they're hard to service and support. If the screen fails, the whole PC usually needs replacing; if you want to add more memory or a larger hard drive, cracking open an all-in-one is far harder than opening a desktop case. 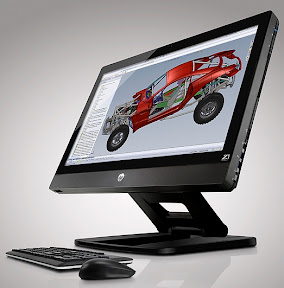 The HP Z1 workstation; power without the tower

HP has paid attention to all of those issues and produced a full-power workstation with quad-core Xeon processors, up to 32GB ECC DDR3 memory, Nvidia Quadro graphics cards and RAID-ed dual SSDs all tucked away behind a 27in. screen that can display a billion colours (prices start from £1,349 plus VAT). It's available with Windows 7, SUSE or RedHat Enterprise Linux. Not only does the aluminium case of the Z1 look stylish and professional; it's also beautifully designed from a practical standpoint.

The Z1 comes with a clever stand (which can be replaced with a standard VESA mount) that lets you swivel the case down and pop the screen open like a lid, to reveal a neatly organised interior with components you can remove easily without needing any tools. Remove the internal distribution cable and the power supply pops out easily. If you want to check whether the PSU is the problem, it has a three-pin power socket you can plug a standard electrical lead into. If it's working, a green LED lights up and you know the problem is elsewhere. The graphics card and even the optical drive pop out neatly when you press down on the small handle, helpfully marked with a green dot. The hard drive socket will take either a standard 3.5in. drive or two 2.5in. SSDs, cleverly offset in the space to improve airflow. The dual cone stereo speakers (which face forward rather than pointing down at the desk) are mounted in rubber housings so even the heaviest bass won't shake the screen. 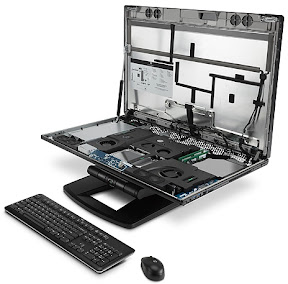 The Z1 is easy to open and easy to service without tools; components unplug and pop out, but a Kensington lock keeps it all secure

There's an internal USB port, which is handy for the expensive USB dongles some CAD packages require (the case can be locked shut with a Kensington lock for security). You can also use that for an optional wireless keyboard and mouse adapter if you want to keep the system looking neat, and there's built-in 802.11a/g/n Wi-Fi and Bluetooth if you want to avoid a network cable (and a 'window' for the antenna in the metal case to avoid interference). That uses a Mini-PCIe card, so it should be upgradeable to 802.11ac in future. External ports are all on the right-hand side of the screen for convenience; a slot-load optical drive (there's a Blu-ray option), a memory card reader, twin USB 3 ports, 1394a Firewire and audio connectors. The base of the screen has USB 2.0 ports, S/PDIF, Gigabit Ethernet, the power socket and DisplayPort so you can run a second screen as well (something else few home all-in-one systems offer). An HD webcam and array microphones are built into the case as well. 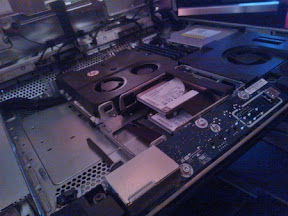 The internal USB port and twin 2.5in. SSD drives in the Z1. The Nvidia Quadra graphics card has been removed.

The 27in., 2,560-by-1,440-pixel screen has an excellent viewing angle and a bright, clear and vivid image. It's not a touch-screen, although HP tells us that typical graphics design and CAD customers are asking for Wacom-style active pen rather than purely capacitive touch, and the system is designed to allow the addition of touch in future models if there's demand.

System specs and details are printed and etched into the inside of the aluminium case and the back of the replaceable LCD screen. When you're ready to shut the lid, shock absorbers on either side of the screen slow down the last 10mm of closing to prevent any damage.

It's this kind of attention to detail that's both practical and delightful. The combination of great design and powerful specs make the Z1 stylish and desirable as well as a powerhouse workstation. Power without the tower, as HP puts it.

The best 17-inch laptops you can buy

Inside Ed Bott's home office: 'Two of everything'