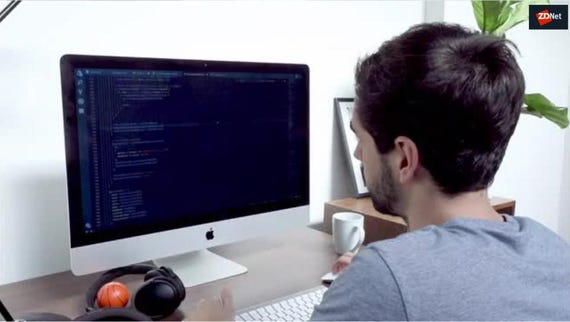 Has the time for holograms finally arrived?
Watch Now

After two months spent at home, away from as many other humans as possible, who hasn't been dreaming of sharing a beer with friends in a bar, rather than through centimetre-wide Zoom squares? Or of shouting their support for the local football team in a busy stadium? Or even sketching out some ideas on a whiteboard, with colleagues, in an actual meeting room?

Now VR company XRSpace wants to create a "social reality", where things like this can happen in a parallel, virtual rendering of the real world.

XRSpace is led by Peter Chou, the ex-CEO of Taiwanese electronics company HTC, and he had successes with devices including the T-Mobile G1. For the past three years, however, Chou has been working on what he believes to eventually be the successor to the smartphone: virtual reality.

The company is launching a VR platform dubbed Manova, designed for mass market users, and which claims to create "the social reality of the future"; as well as the world's first 5G mobile headset, the XRSpace Mova.

Chou compared the announcement to the launch of his first smartphones with HTC a few decades ago. "This is a very exciting time because 5G is coming," he told ZDNet. "There is a chance that 5G will make the experience of VR much more relevant to consumers. We are trying to make the overall experience more mature, so that it appeals to a mass market."

It's not just about the faster speeds, or the ability to use the device in any environment, such as a high-speed train or an airport. Chou also pitched the better design of the headset, which he claimed is about half the size of the average, while still being powered by Qualcomm's Snapdragon 845, and supporting 6GB of RAM; all for $599.

What's more, XRSpace's Mova is completely hand controller-free. A sensor tracker and a powerful optical system on the front of the device can register how users move their bodies, and reproduce them in VR. "It's true mobility," said Chou. "You don't have to carry anything around: wherever you are, you can pull out the headset, pull out your hands, and get started."

Through hand and leg gestures, users can move around, shoot a dart or a basketball, high-five, hug, shake hands or play golf, to name but a few. All of these actions users will be carrying out as their own avatar on XRSpace's Manova – the VR platform the company has created to enable social interactions "without the limit of distance".

Manova is a virtual environment in which XRSpace's developers have already created a number of public and private spaces, and which they expect third-parties to build on. Manova looks very much like any generic city; in fact, it comes with a city center, where users can watch a sports event, meet up with friends to play games, watch a film in their personal cinema, or go to work to meet with colleagues.

Around the city center, there are beaches and greener landscapes to walk, dance, bike or do yoga. Supposing I had the technical skills, could I build a virtual equivalent of my flat, and invite all my friends to pop in for a VR party? That's the idea, said Chou. "It's a multi-player experience, so that users can do things together with their friends and family," he explained. "A parallel world that reflects our world".

Students can attend classes alongside their classmates in Manova; estate agents could show potential buyers around houses, and potential buyers could get their families and friends to come and have a look around to help them make a decision. Users could go to dedicated public spaces to have a virtual drink, meet new people or chat to their friends.

In fact, what can be done in Manova is largely still to be defined: although XRSpace has already set up about 50 spaces and applications in the virtual space, developer kits, SDKs and developer support is now available to further expand the ecosystem.

Chou is convinced that Manova will be adopted as a new way to communicate. Smartphones, he said, don't provide the appropriate tool to express emotion: emojis, gifs, texts and videos are too simple to reflect the palette of human thought. And tools like Zoom might be good for a once-in-a-week catch-up, but it isn't enough to replace a day-full of exchanging and brainstorming with colleagues.

"Manova has a lot more to it than existing tools," argued Chou. "It offers much more than 2D experiences. It creates a world where people can interact in a way that is immersive and personal."

The idea is not new. Interactivity and immersive experiences have been top of the list for a long time when it comes to selling VR services. And many analysts don't buy the pitch, or at least not in the short term: Gartner recently predicted that AR and VR adoption wouldn't take off for another five to ten years. The technologies have now even gained a reputation for having been about five years away for two decades now.

There are many reasons why AR and VR have been struggling with a depressingly small market despite the huge promises of the technology. Headsets, for starters, are still far from smooth and comfortable, while still being pretty pricey. And if customers did purchase a device, there is the question of what they would do with it. Currently, there is very little immersive content available that can appeal to a mass market.

In other words, VR is missing the killer app that will bring the technology to other users than gamers and enterprises.

SEE: These smart plugs are the secret to a seamless smart home (CNET)

Chou himself doesn't deny that VR and AR are immature technologies. "We think that the potential is huge, but there is still a perception that XR cannot go beyond B2B or certain communities like gamers," he said. "People think it's bulky, gimmicky, hard to use, complicated, and that it doesn't have interesting content. In fact, the vast majority of apps on VR at the moment are solitary, not interactive. But for the last three years, we've been focusing on lifting those barriers and solving those problems."

A more intuitive, faster headset, along with a platform designed for users to interact, argued Chou, together may have a chance to start reversing the XR market trend. Of course, he is convinced that as soon as users pick up the device and try it, they will like it; but getting them to pick it up in the first place is by no means a given.

"There are many challenges still," he said. "The biggest one is probably to get people to use it. Making the product accessible won't be easy."

VR headsets won't be replacing smartphones just yet, he admitted. Chou maintained that his product will be the "new 5G communication experience of the future", but it will be at least another five years before devices are small enough to compete against the phones in our pockets.