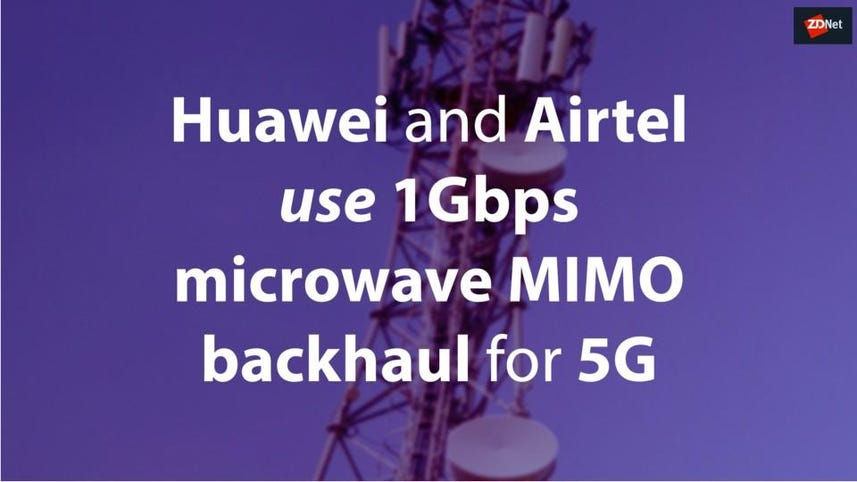 Indian telco Bharti Airtel has rolled out over 100 hops using microwave Multiple Input Multiple Output (MIMO) technology from Huawei that has increased its backhaul capacity by a multiple of four, the Chinese giant said on Sunday.

The MIMO links between the towers have been used for half a year and are capable of transmitting up to 13 kilometres while using 20% less power, Huawei said. The company claimed Airtel now had the largest deployment of MIMO microwave on the planet.

The 1Gbps links currently use 28MHz of spectrum, and with the addition of another 28MHz, will hit 2Gbps.

India is currently mulling whether to allow Huawei to be used in the nation's 5G rollout.

See: Will India allow Huawei to sell its 5G networking equipment in the country?

Last week, Huawei founder and chief executive officer Ren Zhengfei said the company would be willing to licence all of its 5G technology to a US company.

"Source code, hardware, software, and the verification, production and manufacturing know-how, all of these are included in the package. And if they need it, we can also license the design of the chipsets," Ren said.

"After getting the licence, they should be able to compete with us around the world. It's not just confined to the US business."

At the start of the year, Ren pointed to Huawei's work on 5G and microwave technology as giving the company an advantage that might see bans lifted in the future.

"Huawei is the only company in the world that can integrate 5G base stations with the most advanced microwave technology. With that capability, our 5G base stations don't even need fibre connections," Ren said.

"Instead, they can use superfast microwave to support ultra-wide bandwidth backhauls. This is a compelling solution that makes a lot of economic sense. It works best for sparsely populated rural areas."

On Thursday, Huawei announced it had developed a fully containerised 5G core network.

In its first quarter earnings reported last month, Singtel Group saw its underlying net profit shrink by 22% to SG$575 million thanks to a SG$162 million exceptional loss by Airtel.

The loss by Airtel was related to provisioning for "derivative liabilities relating to customary indemnities provided to a group of investors of Airtel Africa and expenses relating to its listing", as well as depreciating 3G assets and spectrum refarming.

Huawei unveils the Mate 30 series under a trade war cloud

If you can overlook the absence of Google's apps and services, Huawei's Mate 30 series has a lot to offer. It's a big ask though.

Chinese tech giant unveils ambitious plans to build the architecture needed to meet growing demand for more compute power and artificial intelligence, pledging to do so on an "open" ecosystem" and launching an AI training cluster that it says is 10 seconds faster that the current ResNet-50 record.

Ren Zhengfei seems to be yet another blind optimist about technology's inevitable benefits, but with 'regional characteristics' and an odd vision for what a 'level playing field' for 5G looks like.

A report from a 5G trade association shows that 4G/LTE networks continue to grow despite the looming rollout of 5G. Those waiting for faster wireless shouldn't worry, though.