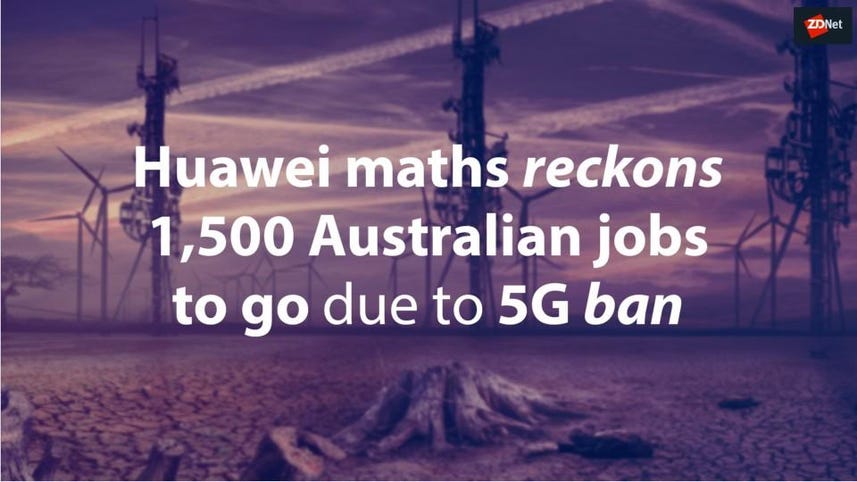 In August, Huawei said it had cut 100 jobs in Australia, and over the next five years the number could rise as high as 400 redundancies thanks to the ban placed on the company in 5G rollouts by the Australian government.

Just over three months later, Huawei has decided to factor in a number of jobs of local contractors and subcontractors to come up with a total of 1,500 jobs by the end of next year.

The Chinese giant said its annual payments to local contractors has dropped by "tens of millions of dollars" already, with its construction work to end in the coming two years.

"Our suppliers are overwhelmingly small-to-medium sized business employing around 30 people and in many cases Huawei is currently delivering around 80% of their annual revenues -- so without us they are in huge trouble," Huawei Australia director of corporate and public affairs Jeremy Mitchell said.

"Once you factor in the sub-contractors that are employed by our principal suppliers, we are currently responsible for around 1,500 jobs in the local telecom construction industry -- but the cold reality is that unless the 5G ban on Huawei is reversed those jobs will be lost over the next 18 months."

Huawei's calculations still have some way to go to top the 8% of Australia's entire workforce that the copyright industry laid claim to in July 2014.

Mitchell further claimed 5G deployments in Australia are proceeding at a "glacial pace" due to a lack of competition.

Last week, Telstra announced it was extending the reach of its 5G network with 15 additional regional cities in Australia's eastern states having coverage switched on.

"In terms of our dense population coverage, proportion of devices that we're selling that are 5G capable, we are probably second only to Korea," Telstra CEO Andy Penn said.

For the Internet of Things, Telstra network engineering executive Channa Seneviratne added the telco would soon have almost 4 million square kilometres of narrowband IoT network coverage, thanks to being able to expand its coverage on individual sites from 100kms out to 120kms, which is due to arrive early in 2020.

Telstra also said a quarter of its Android phones sold since July are 5G capable.

At the start of November, Optus announced it was making its 5G Home fixed wireless service generally available for 138,000 homes in its 5G footprint.

Also on Monday, Huawei announced it was appointing Xenophon Davis as its strategic counsel.

"Xenophon Davis will provide us with crucial assistance as we seek to defend ourselves against malicious attacks from entities intent on causing us reputational damage," Mitchell said.

"Every smear against Huawei is also a smear against our hard working staff, and we want to make sure the important discussion around cybersecurity is based on facts and not baseless innuendo that is unfortunately dominating the current discussion."

Speaking to journalists on Monday morning, Prime Minister Scott Morrison said the 5G ban was not directed at any one operator and in the national interest.

"We stand by it," Morrison said.

On whether Xenophon needed to register with the Foreign Influence Transparency Scheme, Morrison said he needed to "comply with the law like anyone else".

"I wish Nick all the best in his new employment and sounds like he's prosecuting his case. It's a free country," Morrison said.

In its own statement, Xenophon Davis said there would be no more free kicks against the Chinese giant.

"We will scrutinise these claims, seek retractions of false allegations, and seek legal redress wherever possible," Xenophon said.

"A good company is being destroyed and hundreds of high-skilled jobs in Australia are at risk -- victims of false and totally unsubstantiated claims pouring out of ideologically-driven 'think tanks' who appear wilfully blind to the difference between the Chinese government and a private company."

On Monday morning, Morrison and Home Affairs Minister Peter Dutton announced the government would be spending AU$88 million on a Counter Foreign Interference Taskforce to be housed within Home Affairs.

Huawei revenue up by almost one quarter for third quarter

Bans are yet to hit the Chinese giant's bottom line.