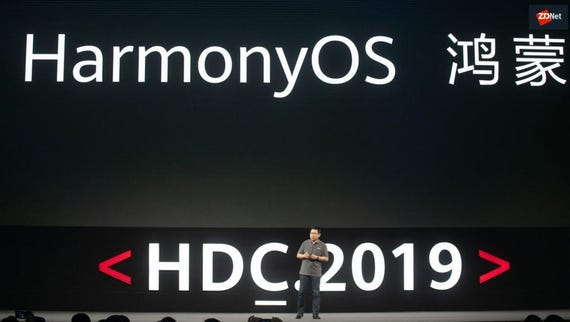 Huawei has revealed some details of the new Harmony OS software that it could use in smartphones, smartwatches, and other devices as a potential replacement for Android.

Until now Huawei has been using Google's Android operating system for its smartphones, and has grown to be one of the biggest smartphone companies in the world.

But the US government – in the middle of a trade war with China – has been warning that allowing Huawei to be involved in building 5G networks could be a significant security risk. Huawei has consistently denied any wrongdoing, but the ongoing row has had an impact on Huawei's business beyond just 5G.

The US government recently added the Chinese tech company to its 'Entity List' saying that it had information that Huawei was engaged in activities that were contrary to US national security or foreign policy interests. US companies cannot transfer technology to a company on that list without a licence from the US government.

While the US government later relaxed that ban somewhat, Hauwei has been keen to show that it could survive without Android if it needed to. HarmonyOS, also known as Hongmeng in China, is Huawei's plan B should Android no longer be an option.

"It is a microkernel-based, distributed OS that delivers a smooth experience across all scenarios. It has trustworthy and secure architecture, and it supports seamless collaboration across devices. You can develop your apps once, then flexibly deploy them across a range of different devices."

Huawei said HarmonyOS will first be used for smart devices like smart watches, smart screens, in-vehicle systems, and smart speakers. HarmonyOS 1.0 will be first adopted in its smart screen products, which are due to launch later this year, the company said.

While Huawei didn't mention using HarmonyOS for smartphones in its press release, Yu told Reuters that the operating system could be used for smartphones now, but that it preferred to stick with Android for now to support its app developers.

Over the next three years, HarmonyOS will spread across a broader range of smart devices, it said. HarmonyOS will first appear in the Chinese market, with plans to extend further after that: to encourage broader adoption, Huawei will release HarmonyOS as an open-source platform, worldwide.

In reality, a new operating system would face a significant battle in a market that has been for some time a two-horse race between Android and iOS.

It's hard to assess the potential of such a new operating system, but in the past, challengers to Android and iOS have struggled to capture support and interest for app developers, who have proved reluctant to spend the money and time to build for a smaller third platform.

As apps are the core of the smartphone experience, any platform that does not have the broadest catalogue of apps is likely to struggle. It could be that even starting with a market the size of China may not be enough to generate the developers and app momentum necessary to create a global challenger.