Full Bio
Posted in Between the Lines on October 29, 2014 | Topic: Innovation

With help from the Lerner Research Institute's Genomic Medicine Institute, researchers at the Cleveland Clinic will use IBM's Watson Genomics Analytics to harness the powers of big data to spot genetic indicators for certain cancers. From there, doctors can formulate individualized treatment plans based on the patient's DNA. 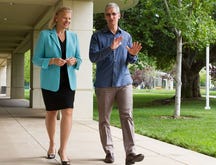 Will Apple bring developers to IBM's Watson ecosystem? IBM was hoping to build a mobile developer ecosystem for Watson, but that takes time. It's quite possible that Watson can piggyback on Apple's iOS developer base.

IBM says Watson has a unique ability to overcome the "needle in the haystack" challenge that often arises with genomic mapping. Doctors need to be able to correlate data from genome sequencing to reams of medical journals, new studies and clinical records — while also treating the patient with the best available procedures.

With its ability to rapidly review massive databases and continually learn with each new patient scenario, researchers and doctors hope Watson will allow them to increase the number of patients who have access to the tailored care options.

"The potential for leveraging the capabilities of Watson's cognitive computing engine in personalized medicine could not be timelier," said Dr. Charis Eng, chair and founding director of the Lerner Research Institute's Genomic Medicine Institute. "Clinicians will benefit from the knowledge and insight provided by Watson in the care of their patients."

This isn't the first foray Watson has made into healthcare. The super computer has also been utilized by the Mayo Clinic, as well as through IBM's partnerships with healthcare providers such as WellPoint and Memorial Sloan-Kettering. IBM even says the latest pilot initiative with the Cleveland Clinic is an extension of on-going programs with the renowned cancer treatment center that aim to aid in the advancement of big data in healthcare.

"Using Watson's cognitive computing capabilities, Cleveland Clinic aims to offer cutting-edge care to millions of patients," said Rob Merkel, VP of IBM Watson Group Healthcare Leader. "We're excited by our continued partnership with Cleveland Clinic. Together we aim to advance a new era of cognitive computing that will aide in the acceleration of new discoveries and bring forward new breakthroughs in personalized medicine."