Full Bio
Posted in Between the Lines on August 18, 2015 | Topic: Data Management 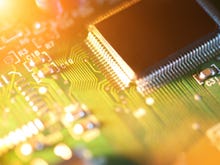 "I've never seen such diversity in opportunity for developers," observed Krzanich during the opening keynote. "There has never been a better time to be a developer."

Computing is already embedded in our cars, homes and even clothes, Krzanich reminded, hinting at the Internet of Things movement that has taken root in the tech world over the last few years.

What is changing, he continued, is that the computing experience is becoming personalized. Based on this assumption, Intel is putting forth a trio of predictions of its own.

First, as computing becomes "ultra personal" with sight, sound and touch capabilities, Intel considers that the "sensification of compute." Secondly, everything can become smart and connected. Thirdly, computing then becomes an extension of its users, making the physical environment "come alive" through wearables and other connected devices, Krzanich described.

"We want our devices to behave more like humans," Krzanich posited.

"I've never seen such diversity in opportunity for developers," observed Krzanich. "There has never been a better time to be a developer."

One is Wake-On-Voice, a collaboration between Intel and Microsoft, designed for PCs and other battery-operated devices running on Intel Atom to Core chips. Essentially, the touch less platform can wake sleeping devices through voice control.

Intel is also teaming up with Google on a few different innovations, including bringing its RealSense technology for 3D mapping and scanning to Google's Project Tango, the search titan's own developer-focused platform for 3D motion tracking on mobile devices.

Krzanich held up a prototype device on stage, measuring about the average size of most Android smartphones on the market today, which he promised "breaks the limits of what a phone can do." One use case, he suggested, would be using the device for 3D scanning objects at home for sending out the blueprints for professional 3D printing.

To boost security for these platforms and more, Intel pointed toward the homegrown Enhanced Privacy Identification (EPID), a silicon-level root of trust compute engine for anonymous communications on IoT-based applications.

Intel also unveiled a collection of software development kits centered around identity and time, which will be released before the end of the year as Intel also prepares related products at the Maker Faire in Rome.

"We want our devices to behave more like humans," Krzanich posited.

The Intel IQ Identity SDK, in particular, could be a game changer for consumers and corporate users alike as Krzanich postulated wearables could solve the password problem through a mixture of enterprise-grade security and consumer-level usability.

Intel hasn't showed any signs of slowing down during the dog days of summer.

At the end of July, the chip maker met up with Micron to unveil a collaboration years in the making.

Boasted as the first new class of memory tech in decades, the transistor-less storage and memory platform -- dubbed 3D XPoint -- was designed to offer a non-volatile, high-performance interface touting high-speed access to data and applications stored closer to the processor.

3D XPoint is boasted to be at least 1,000 times faster matched by 1,000 times greater endurance than present-day NAND solutions on the market.

Intel and Micron said they are already developing products based on 3D XPoint with samples scheduled to start rolling out to select customers later this year. Specific products weren't divulged, but some of the suggested use cases ranged from gaming to mobile healthcare to DNA research.

Just a few weeks prior, Intel published a solid second quarter earnings report, which Krzanich attributed to growth in three departments: memory, data centers and the Internet of Things -- altogether of which accounted for more than 70 percent of operating profit.

"Everything is becoming smart and connected. It becomes a part of you," Krzanich concluded on stage.

Join Discussion for: IDF 2015: Intel teams with Google to bring...