Full Bio
Posted in Between the Lines on November 4, 2013 | Topic: Mobility

Now a new analyst report further beats the drum that Apple has stirred up the pot once again with the fingerprint sensor tacked onto the iPhone 5s. 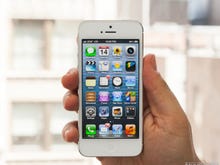 iPhone 5c, iPhone 5s: Connecting up the dots in Apple's plans The Apple rumour mill is going into hyperdrive, but what are the real issues that Apple needs to focus on with its next iteration of the iPhone?

That might come as a bit of a surprise to some followers of the iPhone market since the 5s and 5c were unveiled in September. While the extra layer of security is by far one of the most (if not THE most) notable addition to the iOS smartphone, the advanced feature has lost some of its initial luster.

The drop off in attention was likely furthered with the introduction of the new iPad Air and iPad mini with Retina display -- neither of which will have the fingerprint sensor despite rumors that they might.

Nevertheless, the fingerprint sensor might be the sleeping lion of the iPhone brand now based on a new report from iHS iSuppli, which declares that Apple has already incited "a new technology boom" for fingerprint-enabled smartphones.

Analysts predicted that 525 million smartphones with integrated fingerprint sensors will ship worldwide in 2017 -- up from just 45.7 million by the end of 2013.

Up until now, according to the report, fingerprint sensor technology on mobile devices has been by-and-large unreliable, putting it simply.

Marwan Boustany, a senior analyst covering MEMS and sensors at IHS, explained further in the report that fingerprint-enabled security has always been "conceptually attractive" but cost and performance inhibited widespread adoption.

But researchers argued that Apple changed the game through its acquisition of AuthenTec last year.

"With the introduction of the iPhone 5s, Apple has overcome these challenges and has offered a fingerprint sensor solution that delivers seamless functionality," Boustany continued. "Now that Apple has shown the way, competitors are in a race to enter the market with similar systems, propelling rapid growth in the coming years."

IHS also noted that Apple isn't alone in this field -- even if the Cupertino company is heralded as the primary innovator throughout the report. Researchers pointed toward HTC’s One Max, the Konka k5 Van Gogh and the Pantech Vega Secret Note as other examples paving the way.

Analysts also affirmed that they expect Samsung to follow suit with its own fingerprint sensor-enabled smartphone by next year.