Adding mobile apps to help with everything from finding a co-worker's desk to locating an available electric vehicle parking spot are options for companies adding smart office tech as part of a digital transformation.
Written by Teena Maddox, Contributor on March 1, 2017

The introduction of smart office tech such as beacons and mobile apps have improved productivity at VMware and Box, which both did major installations last year.

Last fall, VMware completed a project that resulted the addition of 2,000 beacons and several new apps available through its VMware Workspace ONE catalog, the company's enterprise platform that delivers and manages any app on any device. There's a 'v' in front of most of the apps, such as vNavigator and vApprove.

Through the apps, employees can do everything from approving documents to finding electric vehicle charging spaces, empty conference rooms and even get help navigating across the 105-acre VMware campus in Palo Alto, CA. The 17-building campus has approximately 2,300 employees, so it can be particularly difficult for new employees to find a meeting room or desk, said Bask Iyer, CIO of VMware and Dell.

There's also a feature in the works that will show which meeting rooms are available, and if someone is regularly booking a larger room than they need will ask them to book something smaller, rather than wasting a 10-person room on a 2-person meeting.

They're also experimenting with facial recognition. VMware has a cafe set up where employees can grab a cappuccino while they get assistance from the help desk -- similar to the Genius Bar at Apple retail stores. VMware is beta-testing facial recognition so that employees don't have to put their name on a list when they arrive. Instead, it's automatically added and someone recognizes them and greets them by name. The next step, after moving beyond the help desk, will be to add that to the visitor lobby, Iyer said.

But it's not just the improved productivity that matters. It also makes VMware more appealing to current and prospective employees.

"People use it and love it. They come to us and give us feedback. They're not used to IT giving them things like this. They're used to IT not taking a risk, working heavy-duty on the back office. This makes us cool. It makes us very relevant and certain things like this make you come across like an innovative company that thinks about employee productivity and not just saving costs. It changes perception when you do things like this. It's one of those surprises that they didn't expect, because they didn't ask for it," Iyer said.

The pilot for the app began in the second quarter of 2016 and the company staggered the rollout through the third quarter. The mobile app provides step-by-step navigation to conference rooms, or helps find a colleague at their desk. VMware began the project by using the existing wi-fi structure, but added additional wi-fi access points.

The fast navigation is helpful for employees visiting from other locations, or for anyone in a hurry who's not quite sure where something is located on the vast VMware campus. It also allows a meeting room to be released if no-one shows up for a scheduled meeting. With approximately 2,000 employees, this has proven to be useful. "It's a huge benefit to productivity, particularly for new employees and contractors, and people who are ADD like me. It's heavily used," Iyer said.

One of Iyer's favorite things to do is get instant metrics on usage from the apps. "There are 745 users on vNavigator as of now. We've had 11 users today, 90 users this month. vApprove has gotten about 318 users this month," he said, as he reviewed the real-time usage of VMware's mobile apps.

There's also an app for electric vehicle charging spots. It shows when a parking spot is open, or if they're all full, when one will become available. "There are 10 users today and a total of 50 users this month on the [electric vehicle] app. An average is about 20 users a day," he said.

'We don't make a big deal about publicizing the apps. You have to go to the catalog. It's very similar to consumer [apps]. Maybe we should have an internal magazine with mobile apps. We need to figure out a better way internally to catalog," Iyer said.

And the best part is, it hasn't cost much for VMware to create and use these features. "We're not spending much money on this. I didn't give them a budget. Google says that 20 percent of the time their employees work on innovation products. It was like that. This was set up in hackathons -- the people time was nothing. We didn't hire contractors. We wrote the software and bought beacons. I think we spent peanuts. I didn't see it as an approval on my app, so it was under my [financial] threshold," Iyer said.

In Redwood City, CA, there's smart tech in place at Box's 334,212-square-foot headquarters, which opened last year. The 730 employees can use a mobile app, combined with beacons and access points, to navigate through the office space that fills seven floors.

The building includes proximity center location awareness beacons from Aruba Networks, a Hewlett Packard Enterprise company. The wayfinding app includes turn-by-turn blue dot navigation to help employees get from one place to the next. It's particularly convenient for visitors or out-of-town employees, said Paul Chapman, CIO for Box. The project is similar to the one at VMware, because Chapman was on the team that helped design that build, before he joined Box in July 2015.

The headquarters was designed from the ground up, which made it easier to plan out the new smart technology aspects and make it dense with Aruba's wireless access points to support a wi-fi-first facility. Because there were so many access points, fewer beacons were needed, Chapman said.

"One of the things we felt was important when we built out our new headquarters was that we had the most up-to-date technology capabilities when it came to how people move around an open social collaborative workspace like Box, where you don't have single offices, where you have a lot of breakout spaces. and the availability to book and get to meetings was really important for us. We wanted to create as much of a digital experience and speed to the next meeting. A lot of time is lost between meetings and looking for rooms, scheduling rooms and expending meetings and things like that," Chapman said.

When someone needs a meeting room, the app shows which space is available on each floor, and rooms that are being unused 10 minutes after the scheduled start time are made available and reclaimed. "We have a reclaim rate of 17 percent, where effectively rooms that would have been empty but booked are actually being freed up and reclaimed. That's a significant productivity gain," Chapman said.

"Where we're headed is not only with the ability to navigate direct and check you in, we're now looking to do that through voice interaction as well. I can interact to the same application and say, 'find me a room for four people and give me directions to that room and check me into that room.' That is the next phase of where we're going with that," he said.

Box uses Amazon Echo devices with Alexa voice control for employees checking into conference rooms, and they're working with Utah-based Teem (formerly EventBoard) for a conference room application that runs iPads and iPhones and partners with Amazon on Alexa team skills. Google is used for employee calendars, as well as Google Hangouts, since meetings and conference rooms are coordinated by calendars, Chapman said.

Printers have location awareness so that documents do not begin printing until the user is at the printer. That protects sensitive documents from unnecessary exposure. Location awareness is also being used as a credential for entering the building. Anyone can carry someone's badge, but if your device needs to be authenticated through a PIN on a particular device, then it's more secure than swiping a badge, Chapman said.

Recognizing the importance of productivity was a crucial element. "We wanted to make sure that as we moved forward as an organization, we didn't lose sight of how valuable it was to invest in employee productivity. I find that a lot of organizations over time are trading off internal productivity investment with other areas. I know when we're dealing with budgetary constraints it's about trade-offs, but it's easy to convince yourself to live another day with internal productivity pain rather than invest somewhere else," Chapman said.

To limit costs, Box partnered with Aruba to be a showcase use case for how beacons could work in the office. "We didn't allocate money for this, and find a partner to make this happen. Effectively the only money we spent on this originally was time. If we extrapolated it out, it's somewhere in the range of about $60,000 to $100,000 worth of software and devices [if Box had paid for it]. However, we do pay the ongoing software subscription costs and they're relatively small," Chapman said.

"The workplace productivity space is an area that is often traded off over other investments. That's a fair approach in a number of cases, but I think over time it become a habit. It's easy to trade off internal versus something that might be external facing. Over time that becomes a significant impact on productivity and efficiency and, in turn, morale, and can become a source of attrition and lower productivity. So in today's environment where you have a strong contingent of your workforce a millennial workforce that has grown up in the digital world, you have a different style of worker and a new style of workplace that requires a new style of IT," Chapman said. 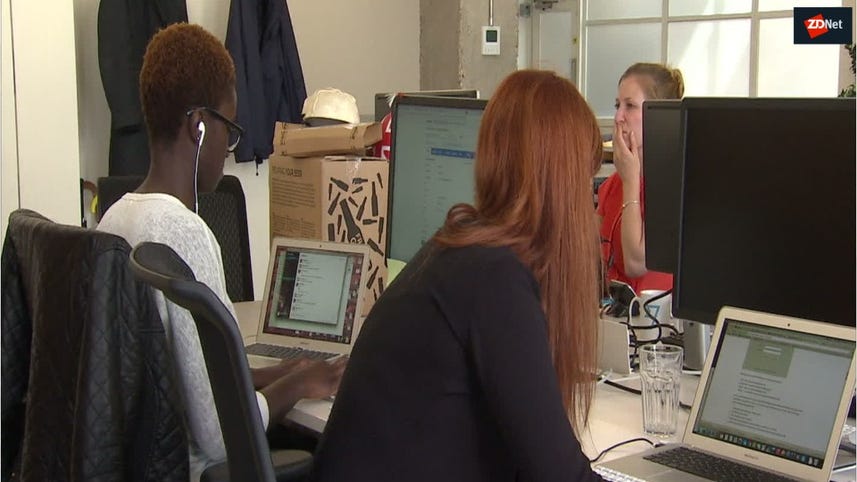