Since Sunday night, more than 1,000 Amazon workers in Germany staged strikes at some of the online commerce company's distribution and logistics centres across the country.

The strikes took place at two facilities in Bad Hersfeld, as well as logistics centres in Leipzig, Graben, and Rheinberg.

According to Ver.di, the labor union that is coordinating the activity, Amazon is refusing to come to an equitable wage agreement. 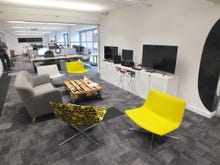 "Amazon still refuses to recognize the legally-guaranteed right of workers in Germany to a collective agreement,” said a Ver.di spokesperson.

The central issue might seem semantic. In Germany, Amazon's workers are classified as 'logistics' employees, who generally receive less pay than those classified as 'retail' or 'mail order' employees. Amazon says that employees start at €9.55 per hour, where employees in the retail sector might start at €10 to €13, depending on the region.

Amazon categorically rejects the notion that its employees in Germany should be considered retail workers. "Amazon's logistics centres are not shops," said an Amazon spokesperson. Instead of directly serving customers, the spokesperson said that employees "take goods from shelves, pack and ship them".

Although wages are the main issue, Ver.di also says that Amazon workers deserve better treatment in terms of benefits and working conditions.

Ver.di says that 2,000 workers have walked out during the current strikes; Amazon puts the number at 1,300. Amazon currently employees around 9,000 people across eight different facilities across Germany.

Not the first time

The current strikes are another effort in a sustained push against Amazon by Ver.di, which began in April 2013. At that point, somewhere between 380 and 500 workers participated in a series of one-day long strikes over the course of several months.

Ver.di picked up the effort once again leading up to the 2013 Christmas shopping season, when somewhere between 1,000 and 1,800 workers (depending on who was counting) participated in a series of coordinated walk-outs. The union was seemingly not deterred when Amazon announced that, in spite of the strikes, its holiday sales were up 15 percent from the previous year.

Ver.di plans to continue the current strikes through Tuesday.