Netra, the Defense Ministry's spy system, will be capable of detecting keywords such as "attack", "blast", "bomb", or "kil"l, to name a few. These keywords will be detected within seconds from sources such as chats, blogs, forums, status updates, and tweets, reports Economic Times. Furthermore, Netra will also be able to capture any voice traffic passing through Google Talk or Skype. 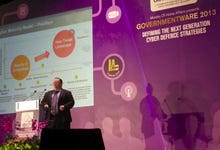 Being able to launch first strikes and counterattacks will help deter potential cyberthreats, especially important for nations amid the increasing interconnectivity of critical infrastructure, say government IT veterans.

The system is currently being tested and will soon be deployed by all security agencies. Netra is being developed by the Center for Artificial Intelligence and Robotics (CAIR), a lab under the Defense Research and Development Organization (DRDO).

Now comes the issue of people having to become more careful about what they are saying online. Some of the keywords can easily be used in the wrong context; can Netra detect the difference? As Netra is currently in testing, chances are that there are methods to determine and distinguish between the two.

But then again, could joking around using keywords in a completely innocent context land someone in jail? Remember, in the past people have been detained and arrested for comments posted on Facebook , and those were simply against other politicians, not against national security.