Multi-year partnership will see HCL handle Cricket Australia's platforms from AR and VR, all the way down to running a cricket club from a phone.
Written by Chris Duckett on June 18, 2019 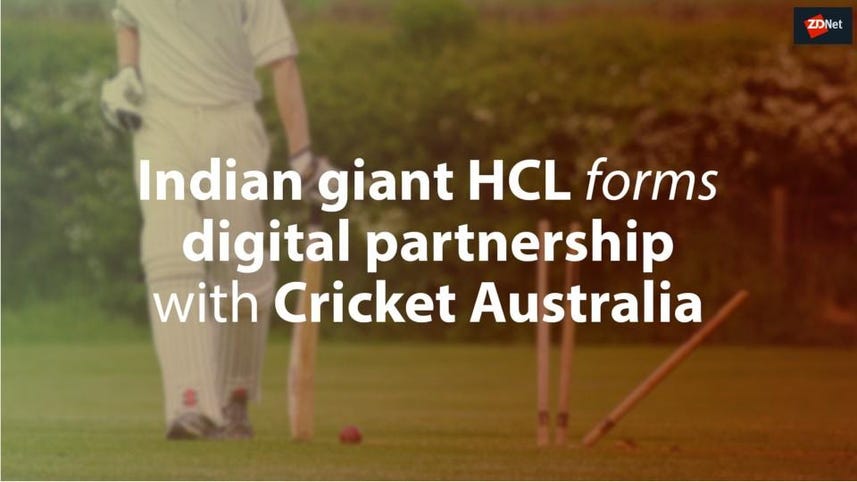 Indian outsourcing giant HCL Technologies has teamed up with Cricket Australia (CA) to handle the latter's digital platform, the pair announced in Melbourne on Wednesday.

HCL will have responsibility for CA's various sites -- such as cricket.com.au, bigbash.com.au, and community cricket hub MyCricket -- as well as the organisation's live app. The Indian firm said it will provide a "platform of platforms" that makes use of infrastructure from both HCL and CA, as well as integrate products from other vendors.

"Cricket is rapidly evolving here and overseas, and part of that evolution involves advancements in  technology and the digital landscape," Cricket Australia CEO Kevin Roberts said.

"The usage of these platforms continues to grow significantly, so partnering with a leading global technology provider to harness this growth and help us take advantage of our leading position is a natural next step."

HCL said it will first transition Cricket Australia from its existing technology provider, before it takes a look at the overall architecture of the platform, and uses augmented and virtual reality to boost fan engagement.

Cricket Australia general manager of community cricket Belinda Clark said she has a vision of being able to run a cricket club from a phone.

CA said it served up 1.4 billion video views last season, has 8 million downloads of its app, and sees 23 million uses of its MyCricket hub every weekend, which it calculated has saved 53,000 hours of volunteer work.

Rather than approach fans on a product by product basis as it does now, general manager of technology for Cricket Australia Mike Osborne said he envisions an integrated platform.

HCL ANZ country manager Michael Horton told ZDNet that the company will be able to bring its large enterprise customer experience to bear while working with CA.

"Really, when you look at Cricket Australia, is it much different to a large corporation? It's not," he said.

"It's really no different, in some ways, to the engagement a bank would have."

Under the arrangement, HCL will service CA in its usual manner, with HCL employees sitting alongside those within Cricket Australia.

"We will work alongside them, it'll become one cohesive team," Horton said. "Where they have their in-house IT team, that is supplemented with the HCL team, and they will work onsite together, as well as leverage HCL's capability offshore and in the US as well."

HCL has previously partnered with the Volvo Ocean Race in Melbourne and Auckland, as well as Manchester United.

"There's obviously a lot of learnings from that, for us to reapply here for Cricket Australia, but again, it's different. This is looking more at the entire ecosystem of cricket."

The Indian firm was clearly chuffed to have landed a cricket board.

"I think it'll be our most over-serviced account," Horton told ZDNet.

At the end of last year, HCL picked up a number of IBM software products for $1.8 billion, including Notes and Domino; Connections; on-premises versions of Portal, Commerce, and Unica; BigFix; and Appscan.

"The products that we are acquiring are in large growing market areas like security, marketing, and commerce, which are strategic segments for HCL," president and CEO of HCL Technologies C Vijayakumar said at the time.

"Many of these products are well regarded by clients and positioned in the top quadrant by industry analysts."

In October 2017, IBM and HCL entered into an arrangement that saw the latter become responsible for the development of Domino products.

Disclosure: Chris Duckett travelled to Melbourne as a guest of HCL.

IBM sells software portfolio including Notes and Domino to HCL for $1.8b

The Indian giant has claimed it is picking up products that are in large growing areas, but they also include Notes.

Canada and Mexico have become alternative development and delivery hubs for IT Services companies but they are simply band-aids for a more complex problem that requires a long-term, robust solution.

Third-party cyber threats are impacting major business decisions, according to a BitSight and CeFPro report. Here are some of the biggest challenges.

When it comes to cloud security, know the difference between a great--or just okay--cloud vendor.