SAN FRANCISCO--Cloud may be the obvious choice for most businesses, but for some markets in Asia-Pacific, any discussion on its adoption will be premature if the necessary infrastructure is not available to facilitate such deployment. For others, it may not necessarily make economic sense to fully embrace a cloud environment.

The Indonesian archipelago, for instance, comprises some 17,000 islands spanning more than 5,000 kilometres from Sabang to Merauke. Some 54.6 percent of its population have online access, while 178 million own mobile devices and there are more than 300 million mobile numbers in circulation.

There is fibre connection in most metropolitan areas across Indonesia, but satellite remains the main communication infrastructure for most of the archipelago. The government is working to push fibre to these areas.

Until this infrastructure is built out, it would be premature to look at any cloud deployment, noted Sudarto, chief of system information and technology for the Treasury Directorate at Indonesia's Ministry of Finance.

"We can talk about [the need for] digitising processes and reaching customers, but at the end of the day, what's important is the quality of your infrastructure," he said. "[Building] digital infrastructures across Indo is critical. Everyone's talking about IoT, AI, and blockchain, but all of this is nothing if you don't have the digital infrastructure to support them."

The Indonesian government is targeting to have broadband access available across the country by 2022, the government officer told ZDNet on the sidelines of Oracle's OpenWorld 2018 conference here.

The Finance Ministry uses Oracle's ERP system and is responsible for deploying IT systems for all ministries in the country.

While he declined to reveal how much the Indonesian government spent on IT, as an indication, Sudarto said the finance ministry had 4,600 users tapping the core ERP system. By 2020, some 300,000 users were expected to use the in-house ERP software across the country's line ministries, which would be developed on Java and a combination of open source and proprietary software, including Oracle Database and RedHat JBoss.

The Indonesian public sector uses Oracle Public Cloud only to run its training programmes and non-production functions, he said, noting that there still were concerns about data security related to cloud adoption.

He expressed confidence, though, that the government would be able to find the right balance between such concerns and the need to tap the benefits of cloud in the future. He also pointed to hybrid cloud as the way forward.

He added that there were plans to build a public government cloud and establish the necessary regulations to support this. The Indonesian Ministry of Finance currently operates one main data centre and another secondary site for disaster recovery.

Sudarto also urged the vendor community to continue to have discussions with the government to help it understand key developments in the tech industry. For instance, he pointed to the need for Oracle to elaborate on its Gen 2 Cloud vision and Oracle at Customer offerings, which executive chairman and CTO Larry Ellison had championed during his keynote at the conference. "We're waiting to hear from them what that really means for customers like us," he said.

Cloud needs to make sense, too

Cloud also may not make sense for some organisations, such as ICICI Bank. According to its CIO Abhijit Singh, the Indian bank uses services from several cloud vendors, but also runs its own data centre. The country's second-largest bank, ICICI operates 5,000 branches across the country.

Speaking to media here, Singh explained that hosting its own data and applications was cheaper than doing so to the cloud, which it tapped mainly for webcast and conferencing services. The bank's operations were too large for it to yield much cost benefit from running on the cloud, he said, pointing to studies that determined economies of scale no longer made sense for environments with more than 3,000 virtual machines.

"We can create the same elasticity and auto provisioning in our own data centres," he said. And while security was not a concern, he noted that data sovereignty was a key consideration and cloud vendors it engaged should own data centres in the country. It also needed to have unfettered access to run audits. 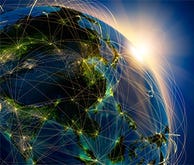 Oracle, too, recognises some enterprises' need to comply with regulations related to data sovereignty and engage with vendors with local cloud data centres.

However, like most vendors in the marketplace, it also grapples with the resources and efforts needed to set up and operate such facilities across multiple global locations, according to Oracle's Asean regional managing director Cherian Varghese.

Speaking to reporters at the conference here, he stressed that the software vendor was not shying away from the challenge and already laid out plans to further expand its datacentre footprint in the region.

Oracle this week announced it was adding several new cloud regions by end-2019 including in Australia, Japan, South Korea, and India.

Varghese noted that enterprises also had the option to deploy Oracle's Cloud at Customer, which would satisfy their regulatory requirements and maintain data sovereignty.

For other customers, he noted, connectivity would be routed to the nearest Oracle data centre. He added that the vendor's benchmark studies involving its autonomous database determined there was no latency issues, even with connections between Asia and its Rochester facility in the US.

He said most customers had no issues hosting cloud data outside of their domestic market, adding that this requirement primarily was driven by data sovereignty and regulatory requirements.

Singh also underscored the need for open standards so systems from different vendors were able to interoperate and easily exchange data.

As for innovation that the bank was excited about, Singh highlighted the potential for blockchain to bring about better efficiencies and security for the industry. He said ICICI had joined a local consortium to deploy the technology to facilitate trade and remittance services.

The Trade Connect consortium currently comprises 14 Indian banks that account for half of the country's trading volume and also includes Kotak Mahindra Bank, RBL Bank, and South Indian Bank. Built by local software vendor Infosys Finacle, the blockchain platform is in pilot and participating banks are hoping it will reduce the cost of information exchange--eliminating intermediary service fees--improve transparency, and speed up processing.

Digitisation also was a common theme across Asean markets, noted Varghese, where banks needed new tools to enable them to introduce new services to consumers and telcos were looking to do the same to stump falling ARPU (average revenue per user).

Governments in the region also were driving digital transformation to create smart cities, he said.

Based in Singapore, Eileen Yu reported for ZDNet from OpenWorld 2018 in San Francisco, USA, on the invitation of Oracle.

Join Discussion for: Infrastructure needs to be ready for cloud...