It builds on Facebook's ongoing plan to reduce the distribution of misinformation across its platforms.
Written by Aimee Chanthadavong on Dec. 17, 2019 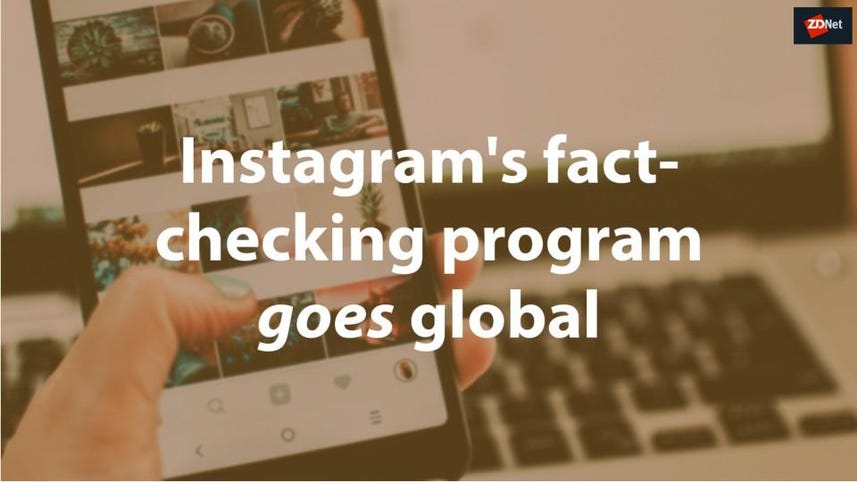 Facebook has announced that it will be expanding Instagram's fact-checking program globally in a move to help identify, review, and reduce the distribution of false information on the platform.

Facebook said the decision to expand the program builds on the work the company started in the US with third-party fact-checkers in May.

"These partners independently assess false information to help us catch it and reduce its distribution," Facebook said in a blog post.

"Today, we're expanding our fact-checking program globally to allow fact-checking organisations around the world to assess and rate misinformation on our platform."

When a third-party fact checker has "rated" content as false or partly false, Facebook said it uses image-matching technology to find identical content across Facebook and Instagram to automatically apply the rating and label it as false. The linking is performed after a rating is provided by the fact-checker and articles from credible sources to debunk any misinformation in the post.

Further, any content that has been labelled as false is removed from the Explore and hashtag pages to reduce the spread of misinformation.

Facebook said the labels are designed so "people can better decide for themselves what to read, trust, and share".

The social media giant said it uses a combination of feedback from the community and its false information feedback technology to determine which content should be sent to face-checkers for review.

"We want you to trust what you see on Instagram. Photo and video-based misinformation is increasingly a challenge across our industry, and something our teams have been focused on addressing," Facebook said.

Last month, ahead of the general election in the UK, which took place last weekend, the social network giant declared it made "significant changes" to how it was going to protect the integrity of elections and fight misinformation.

In the past, Facebook has been criticised for its response to the spread of misinformation -- as well as its role in the Cambridge Analytica scandal.

Several coordinated misinformation campaigns have been taken down over the course of the past year, with Facebook linking fake accounts and "inauthentic" behaviour to operators in Iran, Russia, Macedonia, Kosovo, and others.

Earlier this week, Facebook declared it is ready for California's new privacy law, which will come into effect on 1 January 2020.

Under the new law, Californian users have the right to request a business to disclose, for no fee, the personal information that is being collected about them, as well as whether it is sold or shared and to whom.

Singapore government issues a directive under country's Protection from Online Falsehoods and Manipulation Act, instructing Facebook to publish a correction on a post after the original author refuses to comply with an earlier directive to do so.

This includes content that is posted by users outside of the European Union.

The company will be under more scrutiny than ever with the upcoming US 2020 elections.