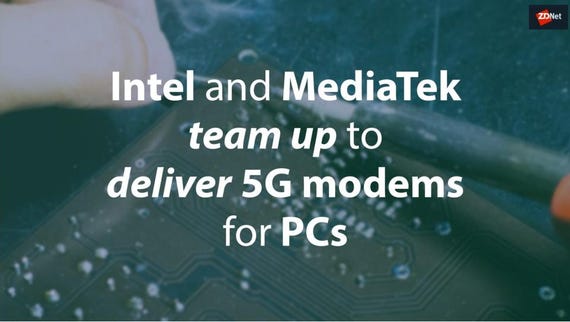 Intel has announced it will be partnering with Taiwanese semiconductor company MediaTek to develop 5G modems for laptops, with plans to deliver the first products by early 2021.

Under the partnership, Intel will develop the necessary hardware and software specifications for the 5G PC modems, including the operating system host drivers, while MediaTek will be responsible for the development and manufacturing of the 5G modems.

"With this partnership, consumers will be able to browse, stream and game faster on their PCs, but we also expect them to innovate with 5G in ways we have not yet imagined," said MediaTek president Joe Chen.

According to the pair, Dell and HP will be among the first PC manufacturers to deliver laptops that will feature Intel and MediaTek's 5G modems.

In addition, the two companies said they are working with Fibocom to develop M.2 modules that will see the module vendor provide operator certification and regulatory support, as well manufacturer and distribute the 5G M.2 modules.

In April, Intel decided to exit the 5G phone modem business, which was sold to Apple in a $1 billion deal a few months later.

Intel said the decision to scrap its 5G phone modem business was because there was "no clear path to profitability and positive returns".

During CES 2019, Intel also announced its latest 5G and AI push as part of Project Athena, an innovation program with new industry specifications for laptops.

Intel said at the time that it expects the first devices using Project Athena to launch during the second half of 2019, with its innovation partners on the project including Dell, Google, HP, Samsung, Microsoft, Acer, Asus, Lenovo, and Innolux.

Following Qualcomm's announcement in October, Intel has jumped on the 5G modem bandwagon, unveiling its solution at CES on Wednesday.

Intel sets out its plans for 5G mobile push

Company uses Mobile World Congress 2016 to position itself as leader in smarter networks - but also announces partnerships with other players to develop 5G.

Intel at MWC: How 5G will change the PC

The insides of PCs and tablets will need to be re-engineered in order to make way for 5G connectivity, Intel's 5G chief has told ZDNet, with the tech giant starting to experiment with this now.

Join Discussion for: Intel and MediaTek team up to deliver 5G...