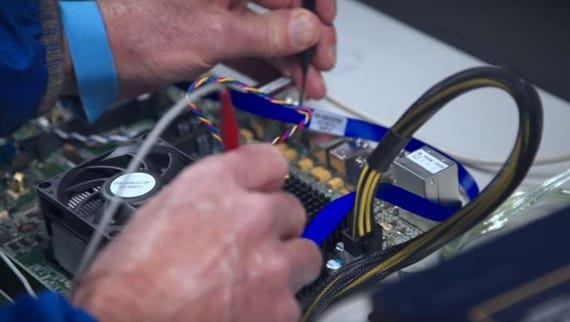 AMD has colored in a few more details about its recently announced high-end Ryzen processor, dubbed ThreadRipper, a 16-core CPU with 32 threads, which it's aiming at high-performance computing applications.

AMD, which trails Intel and Nvidia in market share, announced ThreadRipper at its analyst day earlier this month, as the chip it will aim at the high-end desktop market. It was tipped to be AMD's rival to the new Core X-series processors Intel unveiled yesterday, which top out at the 18-core, 36-thread Core i9 Extreme.

Intel unveils monster 18-core Core i9: 'First teraflop-speed' consumer PC chip As well as the Core i9, Intel has lifted the lid on the whole new Core X-series of high-performance CPUs.

ThreadRipper has about twice the power of its Ryzen 7 CPUs, which are powering several new Windows desktops from Acer, Asus, Dell, and Lenovo.

At Computex on Tuesday AMD showed off Ryzen ThreadRipper and its new Naples EPYC CPU for datacenter equipment, which is launching on June 20.

AMD demonstrated ThreadRipper under a Blender benchmark test blitzing through a rendering, as well as a demo of ThreadRipper with its Radeon Vega-based GPUs running the Prey sci-fi shooter game at 4K resolution.

ThreadRipper is the company's effort to tap into the high-end desktop market being driven by virtual reality, video editing, gaming, and 3D content creation.

While it has fewer cores than Intel's new Core i9 CPUs, ThreadRipper's 64 PCIe 3.0 lanes for devices like graphics cards and so forth tops Intel's Core X-series chips, which peak at 44 lanes.

As AnandTech notes, AMD is playing up this gap between its and Intel's high-end desktop chips, given that all 64 lanes will be enabled for all ThreadRipper SKUs, while none of Intel's new Core X-series below the $1000 Core i9 has all 44 lanes enabled.

AMD didn't offer any updated availability details for ThreadRipper, which is scheduled for release this summer.

When it does launch, there will be X399 chipset motherboards from ASRock, Asus, Gigabyte, and MSI available.