Full Bio
Posted in Between the Lines on October 20, 2020 | Topic: Innovation 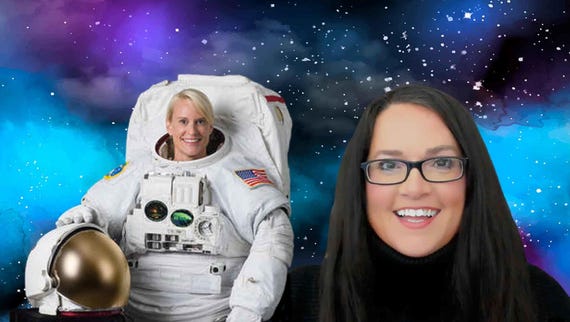 NASA's Dr. Kate Rubin has advice for women after her own journey to space
Watch Now

Intel has sent artificial intelligence (AI) beyond the boundaries of Earth in a tiny satellite designed to streamline data processing in space.

The tech giant revealed the launch on Tuesday. An experimental device, roughly the size of a cereal box, was propelled out of a rocket's dispenser on September 2 to begin its journey around Earth's orbit.

Alongside 45 other satellites of the same size, able to fit in the average backpack, the device -- dubbed PhiSat-1 -- is now traveling at over 17,000mph, 329 miles overhead in a sun-synchronous orbit.

What makes PhiSat-1 different from the other satellites is the device's inbuilt chip, the Movidius Myriad 2 Vision Processing Unit (VPU). Intel's Myriad product line has been designed to accelerate data processing and minimize data movement, and while this architecture is widely used in retail, security, and industrial settings, now, the chips are also securing a spot in space research.

The VPU, found in everything from cameras to personal drones on Earth, provides AI-supported data processing capabilities. PhiSat-1 contains a hyperspectral-thermal camera and, together with the chip, is being used to test out ways to reduce the heavy bandwidth load required to beam images and information to researchers on the ground.

One of the challenges scientists face is separating useless imagery -- such as images of clouds -- from valuable content. Once this data has been captured, saved, and has made the journey from space to our planet -- only to be downloaded and saved again -- researchers will then have to spend their time reviewing and deleting useless imagery.

According to Gianluca Furano, computing lead at the European Space Agency (ESA), the next-generation cameras and sensors now used by modern satellites have vast content capture abilities. However, without a way to streamline the next part of the process -- the actual download and transfer of information -- we aren't necessarily able to take full advantage of these capabilities.

Intel, ESA, space startup Ubotica, and camera maker Cosine worked together to launch and test the satellite. PhiSat-1's onboard processing test was designed to identify and discard cloudy images in order to reduce bandwidth requirements by roughly 30%.

CNET: Elon Musk's SpaceX is getting an HBO series

The team first had to make sure the Myriad 2 chips could handle radiation, and then the AI system itself had to be trained to differentiate between useless and valuable imagery.

Due to the coronavirus pandemic, rocket delays, and poor weather conditions, the original launch of PhiSat-1 was delayed by a year -- but four weeks in, the test has been successful. Over the last month, the team has monitored and verified the images beamed down to Earth, and it does appear that downlink costs can be "drastically reduced."

ESA said the team is "happy to reveal the first-ever hardware-accelerated AI inference of Earth observation images on an in-orbit satellite."

For Intel, the initiative could pave the way for satellite-as-a-service applications, in which small devices could bolster existing networks relying on legacy data processing hardware.

The team is now working on PhiSat-2, also containing a Myriad 2 chip, in the hopes of further proving the value of AI in space. In particular, the researchers hope to go beyond image processing and create a way to install and operate multiple AI-based applications.

Join Discussion for: Intel sends AI to space in launch of a satellite...