Intel is closing assembly and test operation in Costa Rica and will axe 1,500 jobs as a result.

The closure of the Costa Rica plant is part of a wider plan to cut costs and shift Intel's focus away from the PC market and to the mobile market, which has expanded at a rapid pace within the last few years.

Intel was slow to dive in to the mobile technology realm, and as PC sales fell worldwide, this impacted both profit margins and forced a re-think of the firm's future business model. As a result, Intel is rapidly restructuring the company and is working to build a substantial business in producing chips for smartphones and tablets. 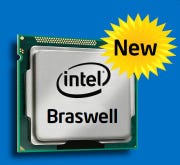 Unlike the 22nm Bay Trail processors, Braswell will use a 14nm manufacturing process, though no launch date has been announced.

According to a spokesman for the chipmaker, a dwindling PC market has made the restructuring necessary. Spokesman Chuck Mulloy told Reuters the plant is "being closed and consolidated into our other operations throughout the world." In the next year, the closure of the Costa Rica plant — which accounts for a significant amount of the country's exports — will give rise to expanded assembly and testing in China, Malaysia, and Vietnam.

Over 1,000 employees of the Santa Clara, Calif.-headquartered company will remain in the country, serving in engineering, financial, and administrative roles.

During a press conference over the weekend, Costa Rica President Elect Luis Guillermo Solis said that following a meeting with Intel representatives, the new government was confident the decision had nothing to do with the change in political situation.

"The decision bears no relation to the election of the new Costa Rica government or the market conditions for [..] potential foreign investment," Solis said.

In January, Intel confirmed plans to slash its global workforce by five percent over this year. Intel's 2012 workforce report states that roughly 105,000 employees are on the books, and so the five percent cut will not only hit Costa Rica, but other geographical locations over 2014.

Intel spokesperson Chris Kraeuter told ZDNet that the company is "making critical decisions to align our resources to meet the needs of our business."

CEO Brian Krzanich has warned investors to expect "a slower recovery in enterprise over the course of 2014."