The Cryogenic Wafer Prober is designed to test and validate qubits needed for quantum computing.
Written by Asha Barbaschow on Feb. 28, 2019 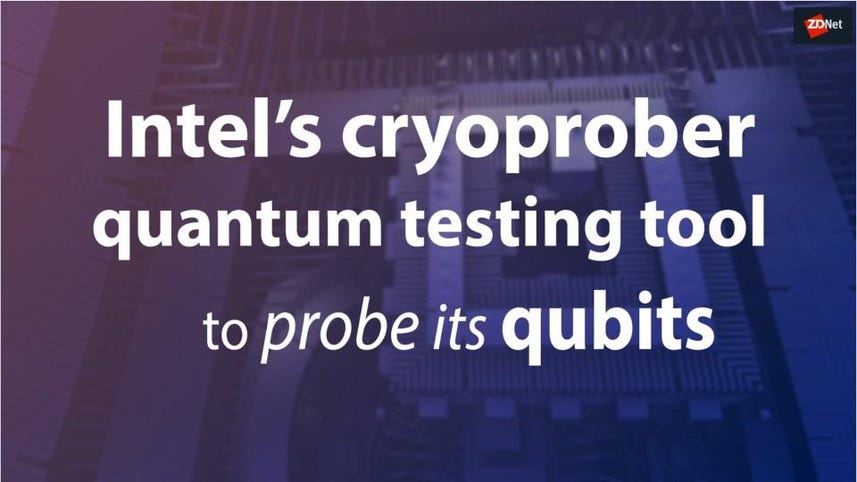 Intel has announced a quantum testing device, called a cryoprober, that it said can measure quantum chips (qubits), and gather information in minutes on sources of quantum noise and the quality of quantum dots.

"Building on our expertise in transistor process technology, we saw the need to create a 300mm high-volume fabrication and test line for semiconductor spin qubits," Intel director of quantum hardware Dr Jim Clarke said. "We are focused on the manufacturability and scaling issues for quantum, and a fast feedback through the cryoprober allows Intel to accelerate our scientific learning."

According to Intel, one of the biggest challenges with quantum computing is data collection and access to data. Currently, each quantum processor is tested for months in a low-temperature dilution refrigerator to determine what does and does not work.

Conventional transistors on a 300mm wafer, for example, can be tested in about an hour; for quantum computing, the turn-on characteristics of qubits must be measured at low temperatures of less than a few kelvins above absolute zero. Intel said that until the Cryogenic Wafer Prober, the electrical characterisation of qubits was very slow, taking days to collect even small subsets of data.

The companies said the Cryogenic Wafer Prober allows researchers to test qubits on 300mm wafers down to temperatures of a few kelvins. It isn't clear, however, how quickly the information can be extracted at this stage.

Intel said the new tool does, however, allow it to automate and collect information on spin qubits, including sources of quantum noise, the quality of quantum dots, and the materials that matter in building spin qubits.

Intel claims that in a first demonstration of the Cryogenic Wafer Prober, it had measured the electrical turn-on characteristic for more than 100 qubit structures across a wafer fabricated at Intel's silicon qubit fabrication flow on its 300mm processing line.

With this tool, Intel said it will be able to speed feedback into the silicon spin qubit fabrication line and accelerate quantum computing research and development.

The Cryogenic Wafer Prober will be located at Intel's Oregon campus next to several quantum computing dilution refrigerators.

"We hope that by designing this tool, the industry can use it to accelerate the progress of quantum computing," Clarke added.

How the industry expects to secure information in a quantum world

With all of the good a quantum computer promises, one of the side effects is that it will be able to break the mechanisms currently used to secure information. But the industry is onto it, and Australia's QuintessenceLabs is playing a key role.

This resource covers the future of computing in the post-transistor age, and the technical hurdles inherent in the pursuit of quantum computing.