Microsoft promised to put out new previews of the IE 9 rendering engine every 8 weeks; just over seven weeks after the first preview there’s a new version with two new APIs, various improvements to SVG, a better Acid 3 score and generally improved performance.
Written by First Take , Previews blog log-in on May 6, 2010

Microsoft promised to put out new previews of the IE 9 rendering engine every 8 weeks; just over seven weeks after the first preview there’s a new version with two new APIs, various improvements to SVG, a better Acid 3 score and generally improved performance.

The most obvious changes are to the Test Drive Area itself, which has three new speed test demos (showing off the speed of compiled JavaScript), three new demos showing off the SVG graphics and several new HTML 5 tests and better scores for the Acid 3 test (68 rather than 55) and the SunSpider JavaScript benchmark (473 milliseconds down from 590 for the first preview; that’s close to Safari 4.0.5, slower than Chrome 4 and 5 beta and Opera 10.52 – but the difference is now blink-and-you’ll-miss-it milliseconds). What the new speed tests show is that using GPU acceleration for SVG and other parts of the browser make a noticeable difference in Web applications, which is a better test of real-world browsing than synthetic benchmarks.

Three more SVG tests showcase smooth, fast zooming into diagrams and org charts that remain legible with crisp edges rather than the fuzzy text or pixelated edges you’d see with a bitmap – and with the amusing Tweet Cloud you can flip between vector clouds and the bitmap clouds you’d see in a Web page today to see the difference; the clouds use the same image at different sizes to reflect the number of tweets and with a bitmap that looks very fuzzy. This isn’t as artificial a test as it seems; Web sites have to either have graphics in multiple sizes or scale one to fit and SVG makes this easier to code and faster on screen. IE is late to the SVG party but embedding SVG directly in Web pages is extremely powerful and we hope it becomes common enough in all browsers for Web developers to take advantage of it. 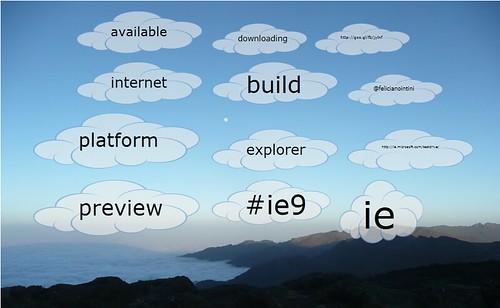 The Flickr Explorer animates multiple images loaded from Flickr at a smooth 60fps as they zoom and swoop around the screen. The browser flip game shows the animation speed of the rendering engine with multiple images at high resolution and how responsive it can be to user interaction (without inducing the same queasiness as the icon spinning and zooming test from the first preview); other browsers that can achieve similar speeds on these tests do it by reducing the resolution of the images they’re working with – IE 9 does it by making the GPU do the hard work. The Star Wars-style scrolling text demo scrolls text smoothly – and legibly, even as it changes size. These are actual Web apps – if very limited ones - rather than canned demos and they show that hardware acceleration takes IE 9’s standard HTML 5 markup and making it feel fleet of foot. 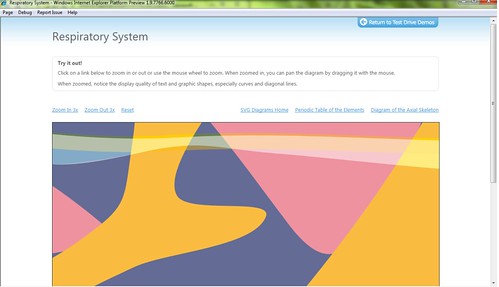 SVG means you can keep zooming in - and IE9 zooms fast

Microsoft isn’t putting out nightly builds because they want to find and fix more bugs internally through their formal QA process before they make new test versions available publicly, but the regularly-updated previews serve the same end; to allow developers to test their sites in IE 9 and give feedback. Platform Preview 2 adds support for the two most common HTML 5 APIs that the first preview didn’t already have, characterSet and getElementsByClassName (for styling divs faster). It also adds support for the ContentLoaded event in DOM, which allows developers to specify the structure of a page and work with it without waiting for all the elements to load - so users can start using scripts that drive features on a page even if some of the page is still downloading because the browser can parse what the page can do more quickly. It supports both W3C-approved methods of traversing the DOM and retrieving ranges of information, with a demo of how that turns any text box into an editor where you can select and style text almost instantly. It also adds CSS3 Media Query support, which allows a site to change its layout on the fly as the size or orientation of the browser window changes; that’s good for making one site that automatically shows different layouts for netbooks, smartphones and standard PC screens, or just having the page resize intelligently if you use Windows 7’s Aero Snap to put two browser windows side by side. 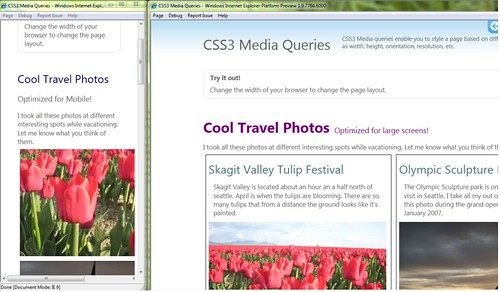 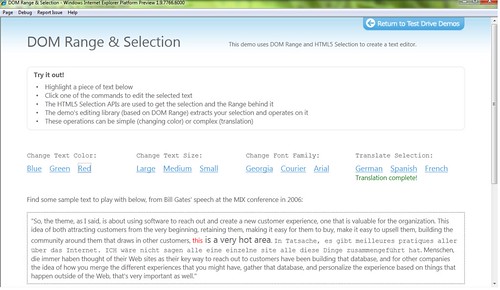 There are minor improvements to the built-in developer tools in the platform preview. The Console window (which shows error, warning and message script events) is now a full tab so it’s easier to get to, you can search through the network information the Network Capture tool collects – and you can change the User Agent string that IE sends to see how that changes what you see on the page. IE 9’s new user agent string isn’t recognized by many sites – Gmail tells all versions of IE to load a page written to cope with older versions of the browser, with only a few tweaks for each version, rather than the same HTML as Firefox or Chrome gets – so changing the string lets you see how IE 9 deals with a page that specifies Chrome, Firefox and other browsers (pick from a comprehensive list or use a custom string). 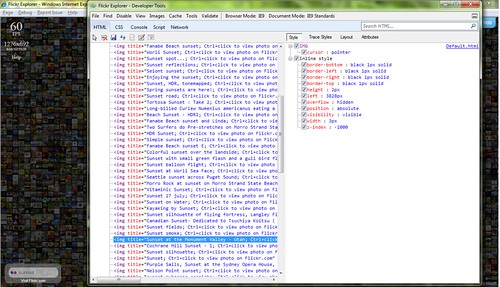 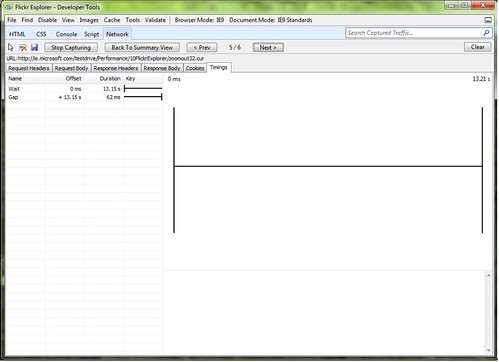 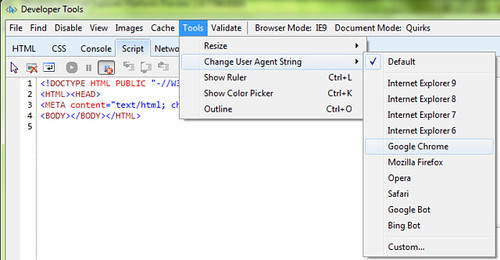 Test pages with IE9, not the browser the page is expecting

It’s still too early to tell what kind of browser IE 9 is going to be (or when it’s going to arrive). The Platform Previews show only the rendering engine, not the browser interface or features and they’re deliberately awkward to use for anything other than loading a single page at a time, to stop anyone trying to use it as their everyday browser (because the security features of IE8 aren’t there either). Based on what Microsoft is promising, the main missing pieces are support for Canvas, for some little-used SVG elements that may change in an updated version of SVG and for alternative video codecs (a stance Microsoft is unlikely to change). The next preview (due mid July) will add support for the HTML 5 video tag, so the incremental approach seems set to continue. It’s encouraging that Microsoft made its self-imposed deadline (and in fact beat it by a week); the changes are small but significant and performance (already impressive for so early a preview) continues to improve. If this progress continues IE 9 looks set to deliver a standards-compliant version of HTML 5 with performance that will make it appealing to users and developers wanting standards-based Web apps with powerful features that are fast enough to use.