With two weeks to go until the Rio Olympic and Paralympic Games begin, the technology team is working under a tight schedule to complete the delivery stage before entering operations mode on August 5.

Technology elements required to stage the Games range from telephony and sound systems for each facility through to radio communications and Wi-Fi services, with Atos, Cisco, and local telecoms giant Embratel acting as main suppliers. Other key technology partners are Samsung, Panasonic, EMC, Microsoft, Omega, and Symantec.

The peculiarities for services at each Olympic venue have been defined at the mapping stage and the team, led by chief information officer Elly Resende, is now in the final stages of the actual technology roll-out. While the public's expectation is that everything should have been ready a long time ago, some aspects of delivery are not that simple.

"I always cite the Copacabana arena as an example because many people ask 'Is everything ready?'. The answer is no, everything is not ready because it could not be done before -- we could not, for example, close off Copacabana beach for a year to have a comfortable schedule," Resende says.

"We have to make the technology interventions within a deadline that's as optimized as possible to avoid unnecessary costs and hassle for the population unnecessarily," the CIO adds.

"All solutions that need to be provided at competition and non-competition venues are being implemented so that we start the Games focusing only on operations, with a set of policies, procedures, and processes and an operations team able to act quickly in the event of some kind of failure even if it it doesn't yet impact the end customer."

According to Resende, one of the "several" challenges faced during the multiple aspects of the technology work that has gone into the Rio Olympics so far have included the mapping stage and the subsequent delivery -- which is the current stage of the technology plan.

"A major difficulty is to map all services, all of the forecast demand, ensure you have the necessary budget for them," the executive points out.

"And now we face the difficulties inherent to this type of implementation, which is to have all services up and running at the venues," he adds.

Out of all the services provided by Resende's team, one that can be described as a top priority is connectivity. This was a major concern in London, where infrastructure is much more developed, so what can be expected for the Rio competitions, predicted to be the most connected Games ever with a somewhat patchy communications set up?

Testing the tech of the Rio Olympics.

"I think it's inevitable to have a greater demand for connectivity, so I would say that is inherent in society, not only our desire. We have rolled out, just like in London, wired services to everyone working at the venues but are also offering a high capacity Wi-Fi network in these working areas," Resende explains.

Some sites including the Olympic venues of Barra and Deodoro as well the Rio city center will have open Wi-Fi networks offered to the public. According to the CIO, the Rio team is working with all the major carriers, the Communications Ministry and the Telecommunications regulator Anatel to ensure mobile services provision, with contingency plans such as an offloading facility supplied by América Móvil's Brazilian provider Claro to relieve the mobile traffic to the Wi-Fi network when required.

"The major carriers will have all the conditions to offer a robust network for data traffic and all the connectivity demand that we expect at the venues," the CIO says.

Other technology demands were brought about by the addition of Rugby and Golf as new sports, which require specific sensors used during the competitions and therefore more mapping, plus some tech advances in relation to the previous Olympiad in London, including convergence between scoreboards and video screens, as well as Wi-Fi in buses used by the media.

Shared infrastructure such as printers and forecast reduction in printing of about 60 percent is another tech highlight mentioned by Resende, as well as the use of cloud computing for the very first time in the history of the Games for key applications such as volunteer and credential management.

Another key area of attention for the Rio organizing committee and particularly Resende's team, has to do with security. A major concern in the previous Summer Olympiad in London, this is something that gets an increasing amount of planning for every edition of the Games and it was no different in Rio. 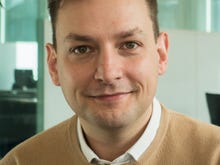 "We did an extensive security project. It was divided into nine working streams from awareness all the way through to protection tools, monitoring work, cyber attack tracking, and many other aspects," the CIO says.

"To be very frank, it is not appropriate for us to start saying that the Games are fireproof in that respect, it is really a subject we really should not be arrogant about," he adds.

"What I can say is that we have a large group of work and we are focused, with various actions with support not only from the committee but government organizations and institutions to be prepared to act, monitor and try and act quickly."

According to Resende, security for the Olympic Games is an area where "attention and humility" should be the main words to bear in mind.

"We wouldn't like to adopt an arrogant manner that there is nothing to worry about in terms of information security. It is a constant point of attention and we will track and monitor it with everything we've got from now through to the end of the Games."

Join Discussion for: Interview: Rio 2016 CIO on delivering the...