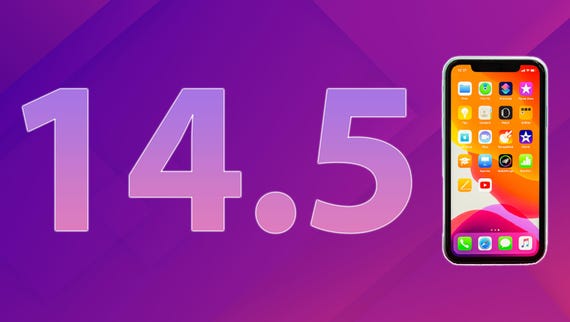 iOS 14.5 features: All the new tricks your iPhone can do
Watch Now

Apple first released iOS 14.5 and iPadOS 14.5 in February through its developer and public beta programs. Since then, the operating system has seen several updates as Apple worked on refining features and removing bugs.

On Monday, Apple officially released the update for all iPhone and iPad users. You can download iOS 14.5 or iPadOS 14.5 right now by going to Settings > General > Software Update. It's a good idea to back up your Apple device before installing the update just in case there's an issue you have a current backup to restore your phone or tablet with.

The most notable and controversial feature included in the update is App Tracking Transparency (ATT). As of April 26, any new app submissions to the App Store will need to comply with ATT, which requires app developers to get permission from a user in order to track their activity across other apps and websites when using an iPhone or iPad.

You can find the new setting in Settings > Privacy > Tracking after installing the update. If you allow apps to ask to track you, you'll start to see prompts when you launch updated apps requesting permission to track your activity. If you don't allow apps to ask you for permission, all apps will automatically be blocked from tracking your activity.

Facebook has been the biggest and most vocal company to speak out about Apple's latest privacy feature due to the impact it will have on ad revenue. Of course, it's not just Facebook that's going to feel the impact of ad tracking being an opt-in feature on all iPhones and iPads, the entire advertising industry undoubtedly will also.

Also in iOS 14.5 is a new Face ID feature for Apple Watch owners that solves the issue of unlocking your iPhone with the iPhone's facial recognition feature while wearing a face mask. After turning on Unlock with Apple Watch in Settings > Face ID & Passcode, once your iPhone detects part of your face is covered, it will connect to your Apple Watch and use that as a secondary authentication point. Your iPhone will unlock, and you'll feel a tap on your wrist letting you know your watch was used to unlock your phone.

Siri also received an update in the latest operating system. There are two new voice options for those with English set as the main language on their devices. There's a total of four options now, and when you set up a new Apple device, Siri will no longer default to a female's voice. Instead, you'll be asked to select your preferred voice during the setup process. Your selection will across all of your Apple devices (except the HomePod in my experience).

You can find the new voices by going to Settings > Siri & Search > Siri Voice.

The updates also include several tweaks to the Music and Podcast apps, along with bug fixes and performance improvements.

What's your favorite feature in iOS 14.5? Let us know in the comments below.

Join Discussion for: Apple rolls out iOS 14.5 with controversial...