I think I figured out what's going on with iOS 7. Sir Jony has been trapped in a monochromatic hardware world of his own making for so long that now that he's allowed to meddle in software, he's pulled out that box of Crayolas he's kept locked in the bottom drawer and let loose his inner Wonderland.

I'll get back to iOS 7 in a minute. First, let me tell you about our phones.

I've been using iPhones since a month after the iPhone app store opened back in 2008. After five years, I've decided to dump my daily driver (an iPhone 4S) for a hot new Samsung S4.

In fact, we're getting two of them. 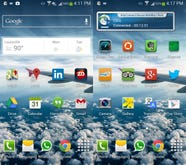 The first ten Android apps a professional should download Business professionals are warming up to Android. For those picking up their first Android device, here are 10 highly useful apps to get you started.

My wife's iPhone 4 contract ran out in April. After two years, the iPhone 4 is surprisingly old. Not everything runs on it (Siri, for example), and our AT&T phone service is often spotty. You still can't manage applications from the Web (you're stuck working them over on the phone or in iTunes).

And it's all so very boring.

But here's the thing: a family plan is cheaper than our two separate plans. We're switching to Verizon because they now have 4G LTE working in parts of our area (although Verizon reception, like AT&T reception, is virtually non-existent in our house). By combining our two plans, we'll drop nearly $60 in monthly costs. Since neither she nor I text or talk on the phone much, a shared texting and data plan works to our advantage.

But none of that really tells you why I'm dumping the iPhone for Android. You want to know why? Two words: iOS 7.

As much as I'm not a fan of the Start screen on Windows 8 , I've come to appreciate active tiles and widgets. Windows 8 lets you see the weather at a glance. My Nexus 7  has widgets that show me my email, the weather and my calendar right on the home screen.

A new Android phone can do the same thing.

My iPhone lies there like a dead fish, telling me nothing. If you believe the weather and clock icons on my iPhone, the temperature and time of day haven't changed for 18 months.

I was disappointed to find that iOS 7 adds weird things like tilting backgrounds (some kind of bizarre parallax effect) and iOS in the car, but not useful things like live icons. The car thing seemed incredibly anti-climatic, because the Davemobile has been answering and dialing my iPhone since the day I first turned the key. Perhaps Apple was reading some old Auto PC press releases, or something, but that's not exactly a reason to stay with the iPhone.

And then there's the overall look. I don't want to use iOS 7. It's ugly. Really, really ugly. Oh, sure, the emperor-has-no-clothes contingent will claim it's forward-looking and beautiful, but the reality is it's the worst of Windows 8 iconography and typography, mixed with a Fisher-Price sensibility.

The camera icon is no longer a lens icon. It's now designed for two year olds learning to identify their grandparent's objects: "Look mama, camera!" Okay, fine, so the old photo icon looks like someone changed Hal's eye from red to blue. The point is, it doesn't look like it's part of the parental controls. It looks like a grown-up person's icon.

The photos app no longer sports a pretty photograph of a flower. It's now a batch of colors. It's not a photo! It doesn't even represent a photo. MacPaint, maybe. But "my photos are in there?" No way.

Top Android apps for summer Summertime is a good time to play with your Android device. These 10 apps are a good way to make your phone or tablet better.

Then there's the forced translucence. I know we all miss the Aero interface of Windows 7 and hoped that some of it would be brought back in Windows 8. But, instead, Apple seems to have decided to make translucence their own, and use it behind everything.

Are you noticing a pattern here? There are a lot of old Redmond ideas in the new iOS.

Remember back in the very earliest days of desktop publishing and fonts, when people discovered the world was more than Courier? We had font overuse everywhere. Apple seems like that with translucence. The Apple folks seemed to have decided it's cool, and they might as well make every single background translucent.

Ever have finger paints and mix all the colors together into one brown smush? That's what your iOS 7 screens are all going to look like. Ugh.

Now, don't think we're anti-Apple. We have a pile of Macs (mostly running Windows, yes, but that's not the point). We have iPhones, iPads (his and hers), an iPad mini, a boatload of iPods, and more. We also have Android tablets, and Kindle Fires. And we spent years on Palm OS (we created PalmPower Magazine back in the day).

The point is, we're ambitextrous. We don't side with any one smartphone or OS out of fanishness. We just use what gets the job done better, what's least annoying, or most fun.

The fact is, we looked at iOS 7 and realized we just couldn't face two years being locked into using that environment. Then we looked at all the goodies you get with Android phones, not the least of which are replaceable batteries.

We added it all up. We could each get an enormously more capable machine with an interface that wouldn't make our eyes bleed, for less money.

So that's it. The next day that we can get a few hours free, we're heading over to the Verizon store (hoping it doesn't also have a stench ) and getting Samsung S4s.

You might have a day or so to dissuade me. Tell me why I'm wrong. Or tell me why this is the best decision ever. Or, for you five Windows Phone and seven remaining Blackberry trolls out there, tell me why I should jump on your favorite beautiful, if dead-on-arrival, platform.

Join Discussion for: iOS 7: why I'm finally dumping my iPhone...