[UPDATE: March 28: A possible explanation for what's going on has surfaced, and suggests the bug is related to the Shared Web Credentials feature that allows apps and websites to share login info.]

Despite a lengthy beta, it seems that the iOS 9.3 bugs seem to be rolling in thick and fast. The latest bug prevents users from opening links in Safari, Messages and Mail apps, and some third-party apps.

Numerous threads have been posted up on Apple's support forum by frustrated iPhone and iPad users complaining about the issue.

"After update to iOS 9.3 on my iPhone 6 Plus I can no longer click on search links from Google anymore. Tried both in Safari and Chrome," wrote user Agathorn. 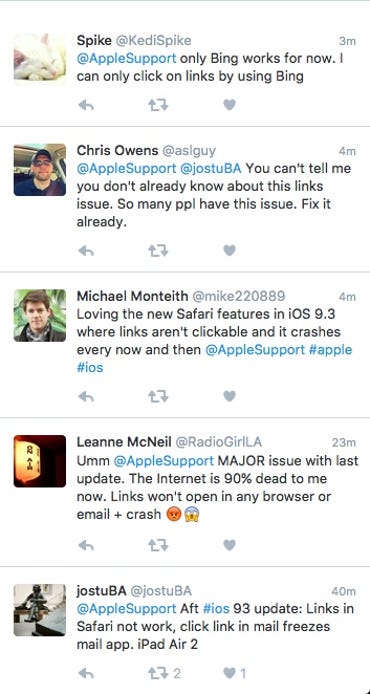 There are reports that iOS 9.2.1 users may also affected by the bug.

Several temporary fixes have been suggested by users, one of which is to switch off JavaScript support in iOS (Settings > Safari > Advanced and then flip the toggle for JavaScript to off).

Another theory is that the bug is caused by installing an app that makes use of extensions, and that removing those apps makes the problem disappear.