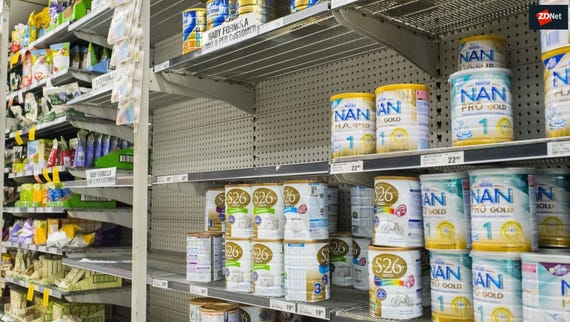 IP Australia is looking to blockchain to provide a solution to supply chain weaknesses, starting with baby formula.

The government entity that falls under the responsibility of the Department of Industry, Innovation and Science is soon moving into export trials of the solution with a Canberra-based small goods exporter, following a successful proof of concept with local blockchain firm Agile Digital and secure cloud provider Vault Systems.

Speaking with ZDNet about the solution, Agile Digital executive director David Elliot explained his company, alongside Vault Systems, is creating a "smart" trademark with the patents office.

"It's about baby powder being pulled off the shelves in Australia and being sent to buyers in China," Elliot explained. "What's going on there is the supply chain is questionable in some countries overseas, they trust Australia, so they'll get kids to videotape themselves buying the cans here and then posting it overseas."

The blockchain trial uses an organisation's trademark as the starting point.

"The trademark is now digital, which means it's compliant or compatible with blockchain usage, so when you create or export a product you notarise its journey onto a blockchain, using your Australian trademark," Elliot continued.

"Now when you're a family in Beijing for example, you can point your WeChat app at the Australian-made product, it's trademarked with an Australian trademark, and you will see its provenance, which is to say when it was made and when it was exported, so if there's any sort of strange story about its provenance, such as it's gone missing for three months or it was sold down the road two months ago, you know something might be wrong with that container and the consumers can ask questions."

Elliot said the department has been very supportive of the use of blockchain.

The Vault Cloud offers a high level of security to allow Agile Digital to provide the solution on top.

Agile Digital and Vault Systems are also working with the Department of Health on a proof of concept that uses blockchain to record who is accessing its medical data.

Elliot said the department was seeking a platform that supports research on health data, while maintaining privacy on citizen data.

"Given we've now got the ability to securely store data within Vault Cloud ... we could leave the data in place, expose the metadata -- that the department can offer for research -- expose that metadata out, and provide a laboratory or a data science toolkit to the internet, so researchers can see it."

The proof of concept with Health took home an iAward for Big Data Innovation of the Year from the Australian Information Industry Association last month.

Elliot said the Australian government is showing enthusiasm in testing technology like blockchain.