The iPad Air is a nice tablet with loads of features to satisfy many buyers. One feature rarely mentioned is a big one. The good battery life of the iPad Air with LTE means it should be able to serve as a mobile hotspot for at least 24 hours.

Those who live in areas that have major storms appreciate the value of a mobile hotspot, those gadgets that can connect to the web and dish it out to other devices over wi-fi. In iOS parlance it's known as "personal hotspot". You turn it on in settings and your other devices see the iPad as a wi-fi hotspot.

See also:  Lure of the iPad Air |  Dirty little secret about tablets: The platforms are basically equal  |  Yes Lenovo, there is a better way for tablets  |  New iPad mini: I pass  |  iPad Air: Color me surprised 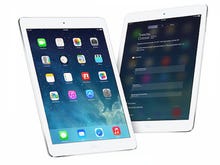 Apple's iPad Air: First look, in pictures (gallery) The fifth-generation tablet, the iPad Air, retains the curves and design of its predecessors, yet is lighter and thinner. Here's the first few snapshots of the long-awaited device.

The 20 hour mobile hotspot service of the original iPad mini is impressive given the 16.3 watt-hour battery. That's why it's likely the iPad Air could serve as a hotspot for much longer periods due to its 32.4 watt-hour battery.

The iPad Air has a much bigger battery to power that bigger Retina Display, but when serving as a hotspot the display is turned off. That should make it possible to run as a hotspot for at least 24 hours, and perhaps much longer than that.

It's important to note that in order to get long mobile hotspot use with any iPad that the tablet shouldn't be used for anything else. Keep the display off and the iPad just serving as a hotspot and otherwise dormant.

Mobile hotspot use alone is not reason enough to buy an iPad Air with LTE, but it's a major feature that shouldn't be overlooked.