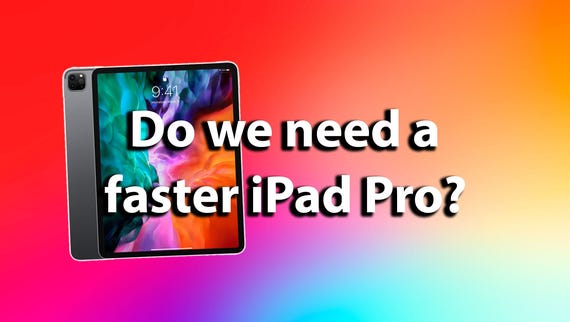 Do we need a faster iPad Pro?
Watch Now

New iPads are coming. The tech media had been feverishly expecting them to land in March, but as that month draws to a close with no announcement of a launch event, the date has changed to "as early as April." 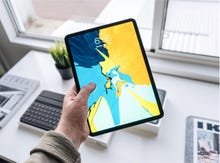 One feature of the iPad Pro update that has been widely reported is a new A14X chip that, according to Bloomberg, "is on par with the faster M1 chip in the latest MacBook Air, MacBook Pro and Mac mini."

Now, you don't really need to be an all-powerful prognosticator to predict significantly faster processors. With every iteration of the iPhone and iPad line, Apple has been doing just that. And now with Apple Silicon having been released and Apple's aggressive plan to oust Intel from inside its machines in a couple of years, we're likely to see the same furious cadence for desktops and laptops.

Must read: How worn is your Mac's SSD, and should you be worried?

But the workflow for iPhones and iPads is quite different from the sorts of workflows that people do on Macs, MacBooks and iMacs.

And it's down to the applications that people run.

Desktops and laptops are, by virtue of design (and legacy), constrained by the hardware, while mobile devices are limited by the apps (or, more specifically, the features made available to developers).

This is why you can put a new Mac and old Mac side-by-side, and even with the OS or stock apps see a significant performance difference.

The same can't be said for iPhones and iPads.

Yes, some differences can be felt within the OS itself (for example, the camera app might be faster), but what people are experiencing when they talk of things like planned obsolescence is updated apps making use of new features putting extra strain on older hardware.

But what about a powerful iPad Pro that has performance on-par with M1 Macs?

Right now, probably not, but there's a longer game at play here.

I can see more and more powerful apps coming to the iPad Pro. I could speculate things from AR and VR to virtualization.

Rumors are that the updated iPad Pro will come equipped with a Thunderbolt port, offering much more flexibility and features than the current USB-C, and the possibilities that this opens out could certainly benefit from more power being made available.

Remember, Apple is constantly building on its ecosystem, and sometimes the "why?" only becomes clear when we zoom out, or with hindsight.

Join Discussion for: iPad Pro as fast as an M1 Mac… but why?