It's easy to compile a list of iPhone power-saving tips, but I'll tell you now that putting them to the test to find out which work and which don't is tedious and time-consuming work. But after several weeks of real-world testing I've found what I believe to be the best iPhone battery saving tips, along with a handful that are just not worth bothering with.

For these tests I used three different iPhones -- an iPhone 5s, iPhone 6 Plus, and the new iPhone 6s -- and all three were running the latest iOS 9.1 update. All the handsets are fully functional and battery life appears to be normal. 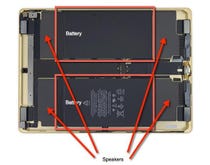 A teardown of the new iPad Pro reveals that the new 4-speaker system takes up a huge amount of space inside the device.

Each iPhone was configured in a similar -- albeit not identical -- fashion. I then applied one of the many battery saving tweaks, then they were used normally throughout the day (email, iMessage, Facebook, Twitter, web browsing, some calls and such) for several weeks while measuring battery consumption at fixed intervals.

Five of the best

Here are five of the best ways to reduce battery consumption if you're in a bind.

Note: My listing is based on real world testing. However, I'm fully aware that your real world might be different to mine, and that as such your mileage may vary. For example, if you do a lot of gaming on your handset, or use the camera a lot, then this will have a dramatic impact on battery consumption, and the tips below might not help you as much as they'll help someone who uses their iPhone for email, Facebook, Twitter and web browsing.

Sometimes the simplest things are the best.

This feature automatically tweaks multiple settings to save battery power, disabling automatic fetching of new mail, reducing screen brightness, and automatically locking the phone and powering off its display more quickly. Apps are also able to detect when low power mode is enabled and can help to further increase battery life by disabling animations and other battery-heavy features.

And the great thing about this is that you're prompted to turn it on when the battery hits 20 percent and then again at the 10 percent mark.

You can manually activate Low Power Mode by tapping Settings > Battery > Low Power Mode. If you do this when you have a fair chunk of battery left -- say above 50 percent -- it's possible to get as much as a few hours of extra usage. The downside is that the iPhone does run noticeably slower, and this can put a dent in productivity.

Turn down the brightness

Another simple tip that makes a night and day different (pun intended) to battery life is simply turning the brightness down. Just flick the Control Center tab from the bottom of the screen to access the brightness setting.

I find that I can happily keep my iPhone at a low brightness setting almost all the time, bright sunshine outdoors being the main exception, but since I live in the UK, that's not a thing I have to deal with often.

Turn off Wi-Fi when not in use

Wi-Fi really burns through battery life, and it seems worse when it's away from your home or office and actively searching for Wi-Fi it can connect to. If you don't need it, turn it off.

Again, if you don't need it, turn it off. It puts the brakes on notifications and background apps that all put pressure on battery life. 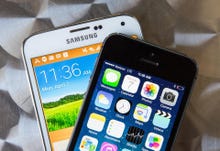 The process of searching for a connection seems to put a severe dent in battery life, and the easiest way to stop this is to flip the handset into Airplane Mode (flip the Control Center screen up from the bottom and tap the airplane icon). If you need Wi-Fi or Bluetooth then you can still turn these on separately (again, from the Control Center screen -- just tap on them). If you're out of cell coverage doing this can easily give you a couple of hour of extra battery life.

The following did have a small effect on battery life, but they were nothing to write home about.

Five of the worst

I discovered that many of the popular tips seem to make no noticeable difference on battery life. Here are five of the most useless battery saving tips I tried.

I have an idea for a future test where I plan to measure battery consumption directly at the battery, but that involves using a busted open iPhone with meter attached in the real world. That's not easy, but I'm pretty sure I'll figure out the kinks.

Why worry about battery life?

I think that life's too short to worry about my iPhone's battery life, which is why I carry around with me a portable battery pack. These days power packs are so small (here's the Anker 2nd gen Astro Mini that's marketed as being "lipstick sized") that you can pop them in a pocket, and yet they pack enough of a punch to add hours to your iPhone's battery life.

What I'm doing from now on is carrying a spare battery pack with me (the Anker 2nd gen Astro Mini is perfect), and if I think that's not going to be enough to get me through the day I activate Low Power Mode. Fiddling with the iPhone's settings in order to try to get a bit more battery life is, in my opinion, tedious and there's a risk that I'll forget to undo the settings later, so from now on I won't be doing it.