Stormy clouds are brewing over Cupertino, Calif.-based Apple after three Citigroup analysts reported that they believe demand in the company's main profit-driving divisions, the iPhone and iPad, are "softening."

Citi analysts Glen Yeung, Jim Suva and Walter H. Pritchard reduced their already-below estimates for the company's second quarter due to the indications of a reduced demand for components by suppliers.

This, they say, adds to their "existing concerns that end-demand for [full-sized] iPad and iPhone 5 in particular is softening."

In a nutshell, Citi found evidence that there is reduced demand from Apple's suppliers for iPhone 5 and full-sized iPad components, meaning that consumer demand is shrinking. For the current March quarter, Citi is estimating Apple will sell 34 million iPhones, down from 35 million, and during the June quarter the consensus is down to 25 million from 32 million. 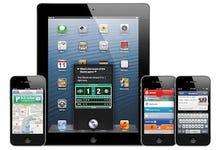 For the iPad, however, the numbers are starting to look on the dire side. In the U.S. and Japanese market, full-sized iPad tablet sales are in decline by more than 10 percent year-over-year in the fourth quarter of 2012.

Why? One of two reasons, if not both. The market is saturated with iPhones and iPads, but also the product launch cycle is about to kick back into gear. During March and April, Apple watchers get twitchy. It could be any day now when Apple will likely send out invitations to the press to come and see their new products for the first time.

Here's the kicker. iPhones are high profit devices for Apple—as are iPads—but iPhones have a higher turnover rate for upgrades. Think about it: you're more likely to upgrade your iPhone than your iPad. Smartphones continue to reign over the tablet space in the post-PC market because they're in your pocket day in and day out. And while everyone needs a smartphone in this day and age, tablets are still a luxury, non-essential device.

For the niche (albeit significantly large) group of the market that bought a tablet, Apple still reigns at the top of the tablet food chain. But tablet demand is still a distance behind smartphone uptake.

Only in January, IDC said that during the fourth quarter of 2012, the worldwide tablet market reached a record high to 51.4 million shipments , up by 75.3 percent year on year. But that's just one fiscal quarter. Rough estimates show that's more than 200 million tablets during the fiscal year. 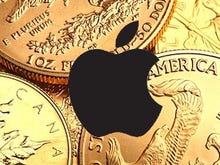 15 things Apple could buy with its $137B cash reserve

Apple has $137.1 billion in cash, but more than two-thirds of it remains off-shore and outside of the U.S. taxman's reach. What could Apple spend all that cash on? We've got some suggestions.

While Samsung's tablet growth is remarkable, its shipment levels are still close to the ground. Apple's growth is slower because of the vast number more iPads the company has out on the market.

Samsung also has a range of different sized devices, whereas Apple has two: the regular-sized 9.7-inch iPad and the 7.9-inch iPad mini. The analysts warn that the "iPad Mini is undoubtedly cannibalizing 10-inch iPad sales," while "product transitions in 7-inch models may be contributing to reduced production in [the June quarter]," which they  "see [as a] risk to consensus estimates."

Apple can only do so much. Incremental features will tick over the product line for only so long, whereas iPhone owners are a little less fazed by the lack of major upgrades. That said, while the company's iPhone business is booming, numerous reports and analysts suggest iPhone 5 sales have been lower than previous iterations of the smartphone, despite a 'major' design change and feature set—such as a 4-inch display and 4G LTE networking. This suggests that a similar apathy towards iPad upgrades may be slowly spreading to Apple's smartphone user base.

Apple is expected to launch the so-called iPhone 5S in August, while new iPads could be revealed next month, according to sister site CNET. Yeung et al also believe a iPad mini with Retina display will be on the cards, along with a non-Retina version of the petite tablet.