After being certified by the U.S. government earlier this month for low-level security clearance work, iPhones and iPads running the latest software are now deemed suitable for U.S. military use.

The U.S. Department of Defense confirmed in a statement on Friday that Apple's iOS 6 mobile operating system is secure enough to connect to secure Pentagon networks.

Earlier in May , the National Institute of Standards and Technology (NIST), which examines and tests mobile devices and technologies for security clearance, granted the Apple software FIPS 140-2 certification (Level 1) last Friday. This approves iPhones and iPads running the software in conjunction with the U.S. government's lowest level of national security clearance. 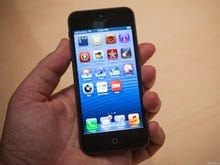 The Defense Dept. previously said it has up until now depended on around 470,000 BlackBerry devices, which have held U.S. government certification for many years. The department also has 41,000 Apple products and 8,700 devices running the Android operating system, according to the press release.

But because these platforms have previously not been certified or cleared for use, such devices had not been connected to secure military networks, except for testing.

Samsung recently received the nod from the Pentagon for any Samsung device protected by the Knox security software, which includes the Galaxy S4 and other compatible tablets.

For the first time, Apple's push into federal use opens up the U.S. government and military to competition for device procurement in the mobile space.

While BlackBerrys had once held the monopoly over U.S. federal agencies, on two fronts there is an increasing responsibility for device and platform makers to secure their hardware and software, but also the dwindling BlackBerry market share has forced the federal government to look elsewhere for long term stability and reliability.

But with the decline in BlackBerry popularity and a slower-than-expected release schedule for the latest BlackBerry 10 smartphones, many federal agencies have already made headway towards rival platforms and devices.

The Defense Dept. also said today it will take "bold steps" to provide information and proper analysis as it fortifies its cloud computing, acquisition and data processes.

He noted that the major challenge faced by the Pentagon is twofold: how can the Department make existing technologies and cloud information work together, but also how to "orchestrate the transition" from a desktop environment to a mobile one, while ensuring data security and integrity?

In conjunction with today's news regarding iOS 6's clearance for the Pentagon, Krzysko cited existing iPad use in the Department. But it wasn't just about the shiny, latest products and features.

He firmly noted that the Department's requirement is to fully understand the "processes, people and policy framework" around the technology, data and acquisition evolution.