iRobot's new Roomba is first to store maps of your home

iRobot created the autonomous vacuum market, and now it's hoping smart features and an advanced docking base will set it apart in a crowded field.
Written by Greg Nichols, Contributing Writer on Sept. 6, 2018 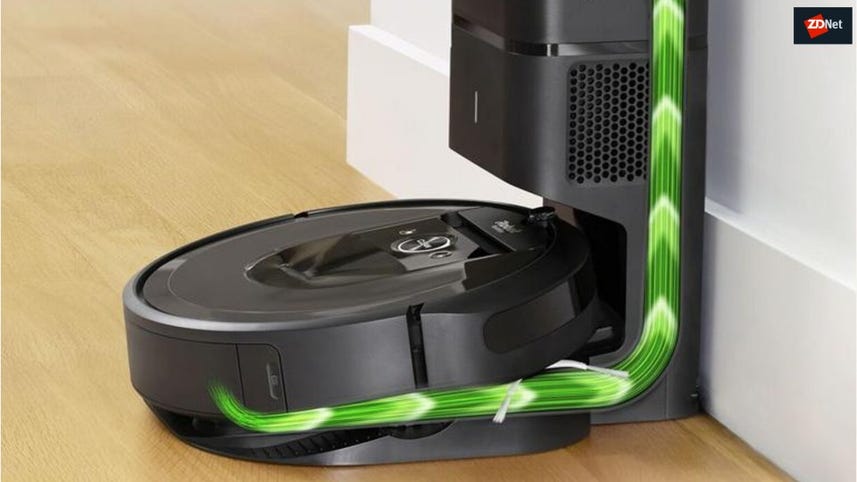 The first is a docking station that automatically empties the docked Roomba into a larger receptacle without any messy cleanup. The second, which adds to the room mapping functionality Roomba models have had since 2015, is the ability of the new Roomba i7+ to store the maps it makes of your home's interior and learn from them over time.

"With the ability to learn, adapt to, and remember a home's floor plan, and the introduction of automatic dirt disposal, the iRobot Roomba i7+ represents the most advanced robotic vacuum ever built," said Colin Angle, chairman and CEO of iRobot. "This robot delivers on the original vision we had when we embarked on the journey to build a vacuuming robot almost 20 years ago."

Storing home maps locally is likely to raise the hackles of privacy advocates. In July of last year, iRobot took a lot of heat after CEO Reuters reported that iRobot might consider selling map data to the likes of Apple, Amazon, and Google. A correction was later issued by Reuters indicating that map data would only be shared with third-party companies like Apple for free and with customer consent. Still, the blowback prior to the correction highlights how sensitive the issue is.

Companies like Apple and Google could use maps data to fine-tune smart home technology to specific environments, such as dialing in a home audio system to match the acoustics of a room.

With a new Roomba forthcoming, I reached out to Ken Bazydola, iRobot's Director of Product for Roomba, for some insights. He was unequivocal about iRobot's stance on selling customers' map data. "The data is private," he told me. "We don't sell it. We use the data for making the robots more effective. We're looking for data trends and usage trends."

"We've had clean maps for awhile," Bazydola told me. "When the data is in flight from the robot up to the cloud, we have secure keys and the encryption keys are traded around. When in servers all of it is encrypted as well."

By storing maps locally, the new i7+ is able to learn the contours of a space in a couple cleanings in order to clean more efficiently. Bazydola estimates the new Roomba cleans his home about ten percent faster than previous models.

The other big benefit is that users can now direct the i7+ to clean a specific room via the accompanying app. That's a significant function, and one that wasn't possible with previous models that erased maps after every run.

Whether the new functionality outweighs the inherent discomfort many have about leaving some of their most personal data on a piece of hardware remains to be seen.

Privacy concerns aside, as a piece of tech the i7+ looks like an impressive evolution of iRobot's proven concept. The Clean Base docking station uses a built-in vacuum to suck dirt from the Roomba into a larger receptacle. The i7+ is also compatible with Alexa-enabled devices and Google Assistant.

Amazon acquires Roomba: iRobot CEO told us they will never sell your data

Amazon acquires Roomba: iRobot CEO told us they will never sell your data