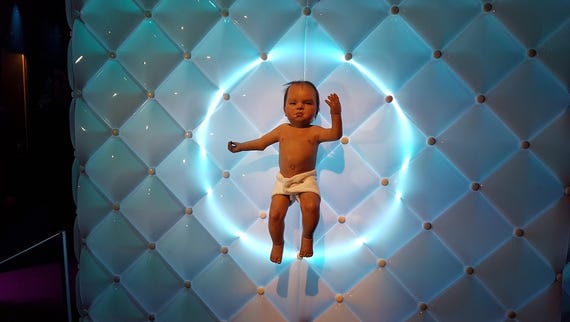 Robots through the ages: Biggest collection ever on display
Watch Now

It's fitting that a writer, not a scientist, coined the term for the autonomous machines that have gripped the collective imaginations of various cultures for millennia. The word robot comes from Czech writer Karel Čapek, who first used it in his 1920 play Rossum's Universal Robots. The play features a kind of biological entity built in a factory, not born.

The root from which the word derives is robota, a Czech/Slavic term meaning the work done by a peasant for a feudal lord. In Čapek's play, that's exactly what robots do: They work for humans. At least, that's what they do at first. Eventually, the robots in the play rebel against their creators and destroy humanity. Whoops.

Also: The tech that changed us: 50 years of breakthroughs

That duality -- robots as useful machines and also as something more than mechanical, something that should, perhaps, be respected and even feared -- has always suffused the idea of autonomous creations. From the start, robots seemed to signify a breathing of actual life into that which is inanimate.

Fittingly, the earliest roboticists were the gods. In the Iliad, Hephaestus, who might be called the patron god of mechanical engineers, created mechanical three-legged tables and bronze statues that served as assistants. He also made Talos, a bronze giant charged by Zeus with protecting Europa from would-be kidnappers.

The first device that might, with some stretch, passably be called a robot was an ancient Greek analog computer made of enmeshing bronze gears. Given the right inputs, the device accurately operated on its own to predict astronomical locations. It was an early indication of what has since become an inextricable link between robots and computers.

Also: A remote-controlled robotic pill could be the next breakthrough in digital health TechRepublic

But the real progenitors of modern robots were made not for useful work but to dazzle and amuse. In 1088, Chinese polymath Su Song built a 30-foot clock tower that contained elaborate clockwork mannequins that danced and spun. Al-Jazari, a 12th century Muslim inventor, built several water-powered musical automata, including a quartet of autonomous musicians who played instruments while floating on a lake.

As the Renaissance took hold in Europe, automatic machines became even more complex and lifelike. Leonardo da Vinci, with his rich understanding of human anatomy, wrote up plans for (and may have built) a humanoid in the form of an armored Knight that could sit up and wave its arms.

As author Minsoo Kang writes in his book Sublime Dreams of Living Machines (and as the good folks at The Good Stuff thoughtfully discuss in this video) the Enlightenment brought a new cultural sentiment that the universe operates as a machine. French inventor Jacques de Vaucanson ran with the idea and became the toast of Paris in the early 1730s when he debuted his Digesting Duck, an automaton in the form of a duck that ate kernels and appeared to digest them.

In 1780, inventor Abbot Mical of St. Petersburg created a conversation machine, which consisted of two mechanical heads on a pedestal that conversed with one another by passing air through artificial vocal cords. There are myriad examples around this time of automata that sip tea, play instruments, and perform complex dances.

But the popular culture pendulum would soon swing as the Enlightenment's optimism gave way to a new distrust of machines. The industrial revolution kept workers in factories, where they seemed to serve machines. The turn of the century also saw the dawn of mechanical warfare. Machines, no longer just marvels of amusement, became instruments of suppression and death in some corners of the collective imagination.

In 1898, Nikola Tesla debuted a remote controlled boat in an exhibition at Madison Square Garden. Coming on the heels of a guide-by-wire torpedo invented by Thomas Edison, robots were beginning to be viewed as potential weapons that could be sent from afar and were capable of extraordinary destructive power.

Eando Binder's 1939 short story I, Robot (the Asimov collection wouldn't come for another decade), captures the sentiment of the age. In the Frankenstein-inspired story, a robot named Adam Link gains consciousness and tries to help humanity, but ends up falsely accused of murder and decides to turn itself off.

For robots, the picture becomes a bit rosier as corporations spot a marketing opportunity. The interwar period gave rise to glamorous and gimmicky PR stunts involving robots. The most famous of these was Elektro, the Westinghouse Moto-Man, an imposing humanoid that could shuffle forward and chain-smoked cigarettes.

So far, robots had delighted and frightened. But it wasn't until the post-war period, when industry was booming in the US and a culture of productivity and technological optimism took hold, that modern robots were born and began to do real work.

NEXT UP: UNIMATE & THE AGE OF THE ROBOTS

Join Discussion for: Living Machines: A quick history of robots...