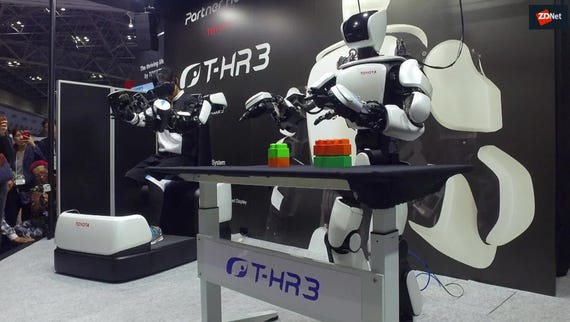 But Soft Robotics is one of a number of companies and grad labs around the world racing to give the current generation of industrial robots a feature that's been tantalizingly out of reach: Human-like dexterity and the ability to grasp and manipulate delicate items.

When that happens, the real robot revolution will arrive.

Consider the current state of the robotics industry. There are an estimated 1.8 million industrial robots in the world doing everything from welding car chassis to flipping burgers. In the next two years, that figure is expected to explode to 3.1 million units.

Though there's a lot of diversity among industrial robots, the machines we're talking about were mostly developed to be widely applicable to a huge range of industrial tasks.

In fact, much like the PC revolution, the current robot revolution underway hinges on technology that allows task-agnostic machines to be customized via hardware and software to do an amazing number of jobs. The current field of heavy industrial robots can weld a joint and also, with a bit of programming, shoot baskets.

A small collaborative robot, likewise, can solder a component on a workbench or help cook a meal.

Read also: This small robot lures hackers away from other robots

Under the hood is about 30 years of development in controls systems, actuator design, machine vision, and research in grasping strategies and pick & place routines, all of which have gelled in an extraordinary way over the past decade.

The ability to manipulate delicate objects has mostly been out of reach so far, and it would be hard to overemphasize the degree to which that's constrained the role robots play in various industries.

Labor-starved markets like food and beverage, advanced manufacturing, and e-commerce currently rely on a mix of human and robotic labor precisely because robots can't easily pick up a head of lettuce or grasp the physical array of items in your Amazon shopping cart.

But those barriers are very rapidly falling. Once soft gripping systems reach a level of commercial maturity, the abilities of those anticipated 3.1 million robots worldwide -- robots built to be adapted with new grippers -- will increase substantially.

Building a better gripper is now akin to the age-old quest to build a better mousetrap, except the gripper problem is on the cusp of being solved by companies like Soft Robotics and labs specializing in soft systems at research institutions like Carnegie Mellon University and UC Berkeley.

The rapid spread of industrial robots has laid the foundation for the change ahead. Soft robotic grippers will be one of the golden keys that unlocks the future of automation.

It's also a sign that we're only at the very beginning of the adoption curve of automation technologies that will have major consequences for the future of work and commerce.

Join Discussion for: Robots with soft hands will transform the...