Is this the tipping point for delivery by robot?

The pandemic has created oddly perfect market conditions for robots to thrive.
Written by Greg Nichols, Contributor on April 20, 2020 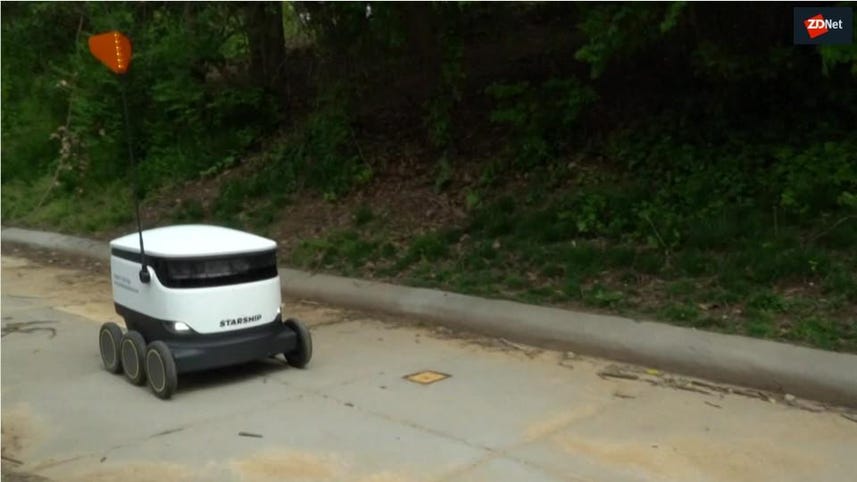 The pandemic has hurt many industries and many workers. A select few industries, however, are booming.

Food and grocery delivery robots seem likely to fall into this small list of pandemic booms. Starship Technologies, probably the best known of the delivery robots, has been expanding beyond small testbeds and is rolling out its robot food delivery service in Fairfax City, VA. Tens of thousands of residents will now be able order contactless delivery from a bunch of area restaurants and grocers. Starship has been delivering on the campus of George Mason University since early last year.

It makes sense that the sector would be primed for a boom. Last year we saw plenty of successful deployments of robot delivery in limited testbeds. The technology is progressing quickly, but the chokepoint has always been a yarn ball of local regulation and mixed feelings among consumers and city dwellers, who don't always relish sharing sidewalks with roving wheeled robots.

Starship, for one, has been lobbying aggressively for legislation to allow delivery robots on sidewalks, both in the U.S. and abroad.

But those hurdles have largely collapsed overnight. It's likely the aversion to robots has been outpaced by general fear of transmission, and that counsels rapid adoption of delivery robots in communities that may have otherwise throttled rollouts.

In the US, Starship, which operates fleets of robots that local restaurants and stores can tap into as-a-service, recently launched in Washington, DC, Tempe, AZ, Mountain View, CA and Irvine, CA. In the UK, the company has expanded its service area in Milton Keynes, where the robots have been delivering food and groceries to local residents since 2018. Users access the service via the Starship Food Delivery app, choose from a range of groceries, food and drink items from participating suppliers, and then drop a pin where they want their delivery to be sent. Once the robot arrives, they receive an alert, and can then meet and unlock the robot through the app. Each robot can carry up to 20 pounds, about three shopping bags of goods.

Twenty of Starship's robots are now rolling around Fairfax.

"Fairfax City officials reached out to us as a way to help connect their residents with local businesses in these unprecedented times," said Ryan Tuohy, SVP Business Development at Starship Technologies. "There is huge demand for contactless delivery now and our robots are an ideal way for residents to get what they want delivered to their door while supporting local businesses. We are really grateful that we can help now and in the future."