The code (PDF) would see Australians get three chances to curb their infringing habits, or face having their customer details handed over to a copyright owner by court order. 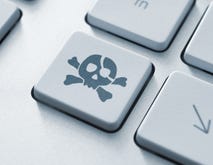 The notice will outline the alleged infringement and provide "general" information on sources for legal content online.

Any account holder who receives three notices in 12 months could potentially have their details handed over to any of the rights holders who sent one of the three notices in that 12-month period.

The three notices will take the form of an education notice, a warning notice, and a final notice. There is a 14-day quarantine period, where an account holder who has received a notice can't then receive another notice in that time period.

The registered rights holder will also need to describe the technology they use to track alleged infringers, and prove that it is accurate. This week, the Maverickeye technology used to track alleged infringers of the film Dallas Buyers Club has been under the microscope in a case brought about by the producers of that film seeking to get access to the customer details of five ISPs, including iiNet.

An expert witness for Maverickeye was unable to explain in detail whether the time an IP address was logged in the Maverickeye software was the same time that the alleged infringement occurred, throwing doubt on whether it is a reliable way to track a specific account holder.

Curiously, the draft code applies only to fixed-line retail customers, meaning those infringing in a business or on a mobile device are exempt from the scheme.

Much detail still needs to be worked out, including the maximum notices an ISP will send out each month, how many customers an ISP needs to have in order to participate in the scheme, and, most importantly, who bears the cost for the scheme.

The code provides that an ISP does not have to act on a report unless the rights holder contributes to the cost arrangements once they are finalised.

Left out from the code is any sort of punishment for alleged infringers beyond having their details made available to rights holders through a court process. Sources close to the negotiations have told ZDNet that rights holders have been pushing for punishments including broadband speed shaping, pop-up notices, and playpen restrictions on the sites that an alleged infringer can visit.

ZDNet reported on Monday that the code needed to be released this week in order for a 30-day consultation process to garner feedback to occur, and still have time for the code to be registered by the Australian Communications and Media Authority (ACMA) by April 8.

Communications Alliance CEO John Stanton said the work to date has been a collaborative effort.

"These issues are complex, and while both industries want to eradicate online copyright infringement, it has proved very difficult in the past for Rights Holders and ISPs to agree on the shape of a notice scheme," he said.

"Much work remains, but publication of a draft code is an important milestone toward greater protection for the legitimate rights of the creative industries," he said.

If successfully accepted, the notice scheme would commence in September this year.